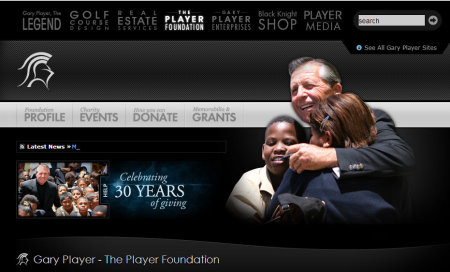 Black Knight International will host the US leg of the Gary Player Invitational charity series on April 13-14, 2014 at Champions Retreat Golf Club in Augusta, Georgia. The annual event is an intimate gathering of professional athletes, celebrities, and business people representing a “Union of Golf and Giving,” as the charity Pro-Am tournament raises funds for The Player Foundation to benefit underprivileged children across the globe.

“Our GPI events continue to grow with each year, and we are pleased to kick off the 2014 series at Champions Retreat in Augusta,” said Marc Player, CEO of Black Knight International. “It is an exciting time to meet with many of our friends and corporate partners while attending The Masters. We are looking forward to a very successful event and hope to make it the best year yet.”

Funds raised at the charity event will benefit The Player Foundation, which celebrated its 30th anniversary in 2013. Gary Player’s namesake Foundation counts an ever-expanding number of beneficiaries including: BerenbergKids, the Chinese Foundation for the Prevention of STDs and AIDS, Wings & Wishes, the Wildlands Conservation Trust in partnership with Qhebeka, as well as many others. Since its establishment in 1983 by Marc Player, The Player Foundation has raised more than $50 million to the support of children’s charities, the betterment of impoverished communities, and the expansion of educational opportunities throughout the world.

“There are so many children all over the world who need access to a quality education, nutritional programs, fitness, and especially a safe and loving environment in which to grow,” said GPI host and golfing icon Gary Player. “I have always felt that contributing to others is essential, and we as a society must do whatever we can to invest in the future of our youth.”