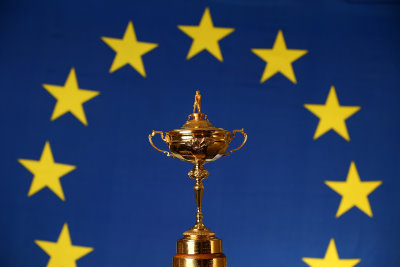 Germany, Spain, Italy and Austria have each hosted Bid Inspection visits from a delegation of Ryder Cup Europe officials – led by Ryder Cup Director Richard Hills – as part of their quest to host The 2022 Ryder Cup.

First on the agenda was a visit to Germany, where the Golf Resort A-ROSA Scharmützelsee in Badsarrow was presented as the potential host venue for the biennial contest between Europe and the United States.

Located on the fringes of the German capital, Berlin, the inland links-style course was designed by former European Number One and six-time Major Champion Sir Nick Faldo.

Ryder Cup Officials met with Marco Kaussler, Director of the Ryder Cup Germany application, and his team plus Richard J. Vogel, the Managing Director of the A-ROSA hotel holding company DSR, to discuss what they see as the cornerstones of their bid to stage The Ryder Cup in Germany for the first time.

The delegation also met with German Cabinet Minister Peter Altmaier and the Mayor of Berlin Michael Müller before visiting the iconic Olympic Stadium and the new airport in Berlin, which is scheduled to open in 2017.

Next, Ryder Cup Europe’s delegation travelled to the north-east of Spain to evaluate the Costa-Brava-Barcelona candidacy.

The two-day trip consisted of a tour of the iconic cities of Barcelona and Girona, as well as the proposed future host venue, PGA Catalunya Resort, where the delegation met with owner Denis O’Brien.

After taking in the logistical planning being put in place by the Spanish bid, the trip concluded with a formal reception with the Mayor of Barcelona Xavier Trias and Secretary of State for Sport Miguel Cardenal, as well as a visit to one of Catalunya’s unique attractions – the Nou Camp stadium, home of FC Barcelona – where the delegation members hit golf balls from the hallowed turf.

Spain’s bid enjoys support from the highest levels, including from His Royal Highness King Felipe VI, who has accepted the Honorary Presidency of the Costa Brava-Barcelona 2022 bid for The Ryder Cup.

Following their Iberian odyssey, RCE journeyed east to view the Italian bid centred on the Marco Simone Club on the outskirts of capital Rome.

Ahead of the inspection visit to the course, Ryder Cup officials were received by Italian cabinet undersecretary and sports delegate Graziano Delrio in Rome’s historic centre, before visiting the Olympic Stadium in the company of officials from the Italian National Olympic Committee, whose support for the bid was reaffirmed by its President Giovanni Malagò.

The delegation were also given a tour of The Quirinale, the private residence of the President of the Italian Republic.

The Jim Fazio-designed Simone course, which was founded by and is still owned by celebrated fashion designer Laura Biagiotti and her family, hosted the 1994 Open de Italia while the Eternal City – whose Mayor Ignazio Marino also joined the delegation – is visible from parts of the layout.

Final stop for the delegation came in Austria and centred around the Fontana Golf Club to the south of the capital Vienna, a venue which has already staged tournaments on both The European Tour and the Challenge Tour.

After a tour of the golf course and a meeting with founder Frank Stronach and owner Siegfried Wolf, the delegation were then shown the many iconic buildings and locations within Vienna itself.

Included in the tour of Austria’s capital was the majestic Hofburg Palace, the Parliament – where they were welcomed by the President of the Parliament Dores Bures – and the Town Hall, where they had an audience with Mayor Michael Häupf.

A further tour of Fontana’s infrastructure and outlying facilities took place on the delegation’s second day during which they also met with Klaus Schneeberger, the leader of the Party which governs Lower Austria, the location of Fontana Golf Club.

Ryder Cup Director Richard Hills, said: “On behalf of everyone at Ryder Cup Europe, I want to place on record my thanks and appreciation of the hard work put in by all the representatives of the nations we visited on our fact-finding trips. We very much enjoyed seeing precisely the vision that each country has for the hosting of The 2022 Ryder Cup and look forward to the receipt of their Official Bids in due course.”

One nation who will not be submitting a bid, however, is Portugal, who informed Ryder Cup Europe officials that they are no longer in the running.

Manuel Agrellos, President of The Portuguese Golf Federation, said: “We have once again enjoyed working with our colleagues at Ryder Cup Europe, as we assessed the merits and viability of formally submitting a bid to host The 2022 Ryder Cup within Portugal. We are certain that a Ryder Cup in Portugal is of paramount importance as it will allow the exposure of our country as a top golf destination and will allow us the opportunity to further develop the game in Portugal. We have reluctantly concluded that the prevailing economic environment would prevent us from developing as strong a bid as we would wish and have therefore decided to wait for a future opportunity.”

Following the inspection visits, the prospective host nations for what will be the 44th staging of The Ryder Cup, will make their formal submission of Official Bids on or before the closing date of Thursday April 30, 2015.

Following that, a period of detailed analysis of each bid by a management team working on behalf of Ryder Cup Europe – together with the assistance of an independent panel of experts – will be undertaken, with the announcement of the successful host country and venue for The 2022 Ryder Cup expected this autumn.