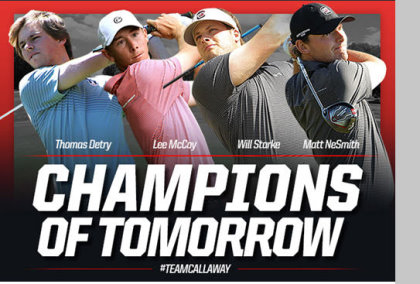 Detry, who will initially play most of his golf in Europe, is joined by Lee McCoy, Matt NeSmith and Will Starke – all four recently turning professional after standout collegiate careers in the USA.

Detry, who follows fellow countrymen Thomas Pieters and Nicolas Colsaerts to Callaway, enjoyed a tremendous NCAA career at the University of Illinois, where Pieters also plied his trade, capped by winning the 2016 Big Ten Championship. He also competed for Team Europe in the 2014 Palmer Cup and represented Belgium at the World Team Amateur Championship.

Commenting on the signing of Detry, Peter Harrison, Director of Tour Relations at Callaway Golf Europe, said: “Thomas was one of the world’s best young amateurs and he has a bright future both in the game and with Callaway. If his first tournament as a Staff Professional is anything to go by – he finished T6 in last week’s KPMG Trophy on the European Challenge Tour in his native Belgium – we have a player that is definitely one to watch.”

The other three signings, all playing their golf in the US, have equally strong pedigrees.

Lee McCoy: A 1st Team All-American in 2016 for the University of Georgia, 3rd ranked amateur in the world and finished Fourth as an amateur at the 2016 Valspar Championship on the PGA Tour.

Matt NeSmith: A 1st Team All-American in 2016 for the University of South Carolina, 1st Team All-SEC (2016) and 8th ranked amateur in the world.

Will Starke: An All-American selection for the University of South Carolina and won the Mackenzie Tour Q-School in April.

Willett, Ko and Bryan are all currently top of the money lists on their respective Tours.

Neil Howie, President and Managing Director of Callaway EMEA, added: “Callaway has a strong heritage of helping to nurture exceptional young golf talent and we are confident our latest signings will enjoy the full support of our Tour teams around the world, and recognise very quickly that ‘Winners Play Callaway’.”

For further information about the full line-up of Callaway Staff Professionals visit www.callawaygolf.com