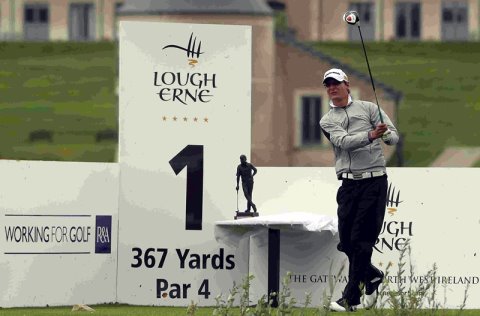 The second Faldo Series Czech Championship will return to Golf Resort Telc on 22-24 June organisers have announced. The tournament has been increased to three rounds in a bid to build on the success of last year and bring more opportunity to the Czech Republic’s top young golfers.

“The Czech Championship was a great success in 2011 with more than 100 competitors taking part in our first ever event,” said Sir Nick Faldo.  “Emerging golfers in the Czech Republic will benefit from tournament experience which is why we are increasing this year’s event from 36 holes to 54.”

Faldo added: “I thank Telc Golf Resort’s owners, CZ Golf, and its Chairman, Dr Petr Svrcek, for their support in bringing the Series back to the Czech Republic but also for taking the Series to Telc’s sister resort, Waidhofen in Austria later this season.”

“Winning the first Czech Championship was a big moment for me,” commented 2011 winner Ondrej Lieser.  “The opportunity to compete in the Grand Final at Lough Erne and learn from Nick Faldo and Rory McIlroy was an experience I will never forget.”

With World Amateur Golf Ranking points on offer, more than 100 top young golfers from the Czech Republic and neighbouring countries will compete in the Czech Championship on 22-24 June at Telc, located 130 kilometres south of the capital Prague.

With the field of boys and girls aged 12 to 21 divided into five age groups – three for boys and two for girls – the winner of each division will qualify for the sixteenth Faldo Series Europe Grand Final, to be hosted by Faldo at Lough Erne Resort in Northern Ireland in September.

The six-time Major winner’s personal coach, Keith Wood will once again attend the Czech Championship to work with the players, part of a Faldo Series drive to combine experience with education.  Wood will also be working with local schoolchildren in a bid to inspire new golfers at the grass-roots level.

Supported by The R&A, the European Tour and Lough Erne Resort, the 2012 Faldo Series Europe schedule features a record 20 tournaments in 14 countries including six in England plus others in Bahrain, Ireland, Chile, the Czech Republic, Greece, Wales, Austria, Brazil, Germany, The Netherlands, Scotland, Slovakia and Russia.

Golfers born in 1991 or later wishing to enter the Faldo Series Czech Championship at Telc Golf Resort should email zdenek.jehlicka@czgolf.cz or visit www.czgolf.cz.