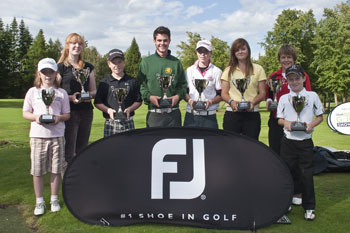 The National Golf Centre’s superb short game academy and range was a fitting venue to host the young players who had qualified for the grand final (11th September), after taking part in two club events and one of four regional finals earlier in the summer.

Twenty-nine qualifiers aged between seven and 17 demonstrated 10 Skills activities based on putting, chipping, pitching, bunker play and the long game. The national finalists were the stars of the competition, in which there are now nearly 600 golf clubs registered and more than 1,400 juniors having participated in the two Official Club Challenges.

Now in its fifth year, the Skills Challenge is an English Golf Union (EGU) and English Women’s Golf Association (EWGA) event which is growing in popularity because it allows youngsters across different age groups to combine learned technical skills with fearless, creative shot-making.

Richard Flint, EGU/EWGA Golf Development Manager, said: “The Skills Challenge encourages dynamic skills from the youngsters in strong competition with each other and is a refreshing partner to traditional competition formats. The skills on show are all taught as part of our structured club coaching programme which gives youngsters the confidence to improve quickly.”

FootJoy, the #1 Shoe and Glove in Golf, has supported the National Skills Challenge and has supplied products and prizes to all players who qualified for the regional and national finals.

Richard Flint added: “2010 has been a fantastic year for the National Skills Challenge initiative. The introduction of the four regional finals has meant that more players have had an opportunity to compete and those players who have attended the final should be very proud of their achievement. We would like to thank FootJoy for their excellent support throughout in offering some wonderful prizes for the young players.”