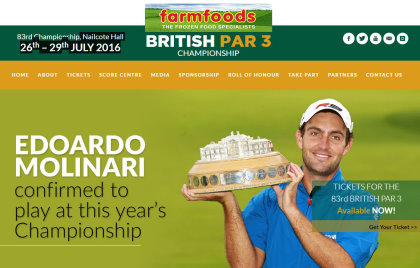 Winning several national championships as an amateur, he became the first Italian and Continental European to with the U.S. Amateur, qualifying for the 2006 U.S. Masters, U.S. Open and The Open Championship. Later that year, he turned professional and won two events on the Challenge Tour in 2007 – the Club Colombia Masters and Tusker Kenya Open.

Making his debut on the European Tour in 2008, he returned to the Challenge Tour the following year after a wrist injury hampered his season but 2009 would prove to be a seminal one. He won three titles – including the Piemonte Open in his home town of Turin – and finished runner-up on four occasions to top the Challenge Tour money list in 2009 with record earnings of €242,979, almost €100,000 more than the previous high total.

Later that year, he shot into the top 50 of world golf after he and his younger brother Francesco became the first Italians to win the World Cup – the first time that two brothers had won the event.

Molinari finished second at the Arnold Palmer Invitational in 2010 and earned his two European Tour victories at the Barclays Scottish Open and Johnnie Walker Championship at Gleneagles. His meteoric rise saw him selected as one of three wildcards in Colin Montgomerie’s 2010 European Ryder Cup team where the home side triumphed at Celtic Manor in Wales. In 2014, he recorded his best ever finish at The Open Championship, tying for seventh place.

The Italian has won professional tournaments on four of six continents on which golf is played: Europe, South America, Africa and Asia. Edoardo will be showing off his short game at the Farmfoods British Par 3 Championship alongside a host of top players led by two-time Major winner and host Tony Jacklin CBE.

Edoardo commented: “It will be a real honour to play in the Farmfoods British Par 3 Championship, I have heard so many great things about it and this year’s field is filled with some big names from golf, I am really looking forward to it!”

Matthew Hayes, Managing Director of event organiser Champions (UK) plc commented: “We are delighted that Edoardo has chosen to play at this year’s Championship and illustrates the ongoing growth of the event, we have a very strong field this year which includes: Open champions, US Open champions, Masters Champions, Ryder Cup winning players and captains, we are extremely proud to welcome Edoardo for the first time.

Golf tour operator GolfKings has announced a further expansion of its sales team with the appointment of two new members of staff.