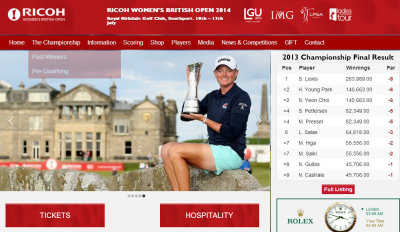 Calvin Klein, Inc. has announced that Calvin Klein Golf, in association with IMG and the Ladies’ Golf Union (LGU), will be the official apparel supplier for the Ricoh Women’s British Open for the next two years.

The partnership will kick off at the 2014 Ricoh Women’s British Open Championship, which will be held on Thursday, July 10th through Sunday, July 13th at the Royal Birkdale Golf Club in Southport, England. The club will begin selling Calvin Klein Golf apparel at the start of the tournament.

“We are delighted to have Calvin Klein Golf as the official apparel supplier for the Ricoh Women’s British Open Championship for the next two years,” said Ross Hallett, IMG Tournament Director, speaking on behalf of the Ricoh Women’s British Open. “We believe this to be the start of a terrific partnership between both of these prestigious brands.”