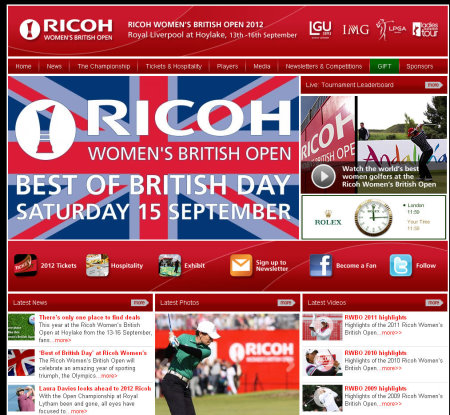 The Ricoh Women’s British Open will celebrate an amazing year of sporting triumph, the Olympics and national pride of the Diamond Jubilee with a special ‘Best of British Day’ on Saturday, 15th September of the 2012 Championship.

The players will be asked to support the day by wearing red, white and blue while competing at Royal Liverpool Golf Club, Hoylake, while spectators will be encouraged to give their Jubilee outfits a final airing on this special Saturday. They will enjoy a day not only of watching the highest calibre of golf but one packed with family fun and festivities including a Beatles tribute act, a traditional British brass band and a chance to be photographed with the ‘Queen’ as well as face-painters and other fun interactive activities for people of all ages.

The British players will fly the flag as they arrive at the 2012 Ricoh Women’s British Open, 13th to 16th September, in the best possible form with 2009 Champion Catriona Mathew leading the home challenge fresh from victory at the 2012 Irish Women’s Open. Other British challengers include Carly Booth who has posted two victories on the LET already this season and Melissa Reid, who won the Prague Golf Masters in June. British favourite Laura Davies, herself a former British Women’s Open Champion, is also showing a timely return to form despite picking up an injury to her Achilles a couple of months ago while Karen Stupples, the 2004 Champion, has already started her preparations with a visit to Hoylake last week.

And to ensure that everyone can join in the fun organisers the Ladies Golf Union and IMG have launched a special ‘Best of British ticket’, available by advance purchase and valid on Saturday only, which includes access to the Championship for two people and a bottle of Champagne for £65. Spectators can purchase the ticket via the Championship website.

Scotland’s Catriona Matthew commented, “I think the ‘Best of British Day’ is a fantastic way to celebrate the amazing year we’ve had, starting with the Jubilee celebrations and moving into a summer sporting achievement that will be tough to rival. Hopefully we can manage one more amazing British performance between us that will see one of the home players winning the Ricoh Women’s British Open, the final Major of the year, to cap a fantastic summer of British sporting achievement.”

England’s own Mel Reid added, “This is a great initiative and one that promises to engage sports fans across the board. It’s the final Major of the year and I hope everyone comes down and gets involved in the amazing atmosphere of the Ricoh Women’s British Open.’’

This year fans will again be able to watch the BBC’s extensive coverage of the Ricoh Women’s British Open in HD (high definition) underlining the significance of the Championship in the BBC’s sports portfolio.

Ricoh, the leading technology provider of Managed Document Services and Production Printing, has been the title sponsor of the Ricoh Women’s British Open since 2007.