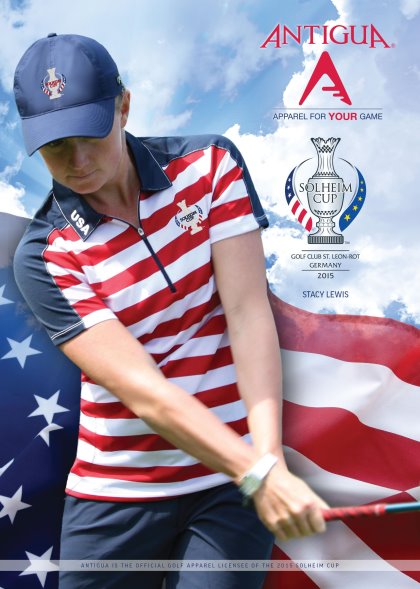 The Antigua Group, Inc., one of the USA’s leading designers and marketers of lifestyle and golf apparel under the distinguished Antigua brand, is the official apparel licensee for the 2015 U.S. Solheim Cup Team.

“We have had the good fortune to design and develop the Ryder Cup uniforms for the American team back in 1993 and now three times for the LPGA and the Solheim Cup Team in 2011, 2013 and now in 2015”, said Ron McPherson, president and CEO of the Antigua Group. “These opportunities are a great honor and recognition for our brand and company.”

The process of designing and developing the team uniforms alongside U.S. Team Captain Juli Inkster and U.S. Assistant Captain Pat Hurst began in late fall 2014 and the designs were finalized in January.

Over the course of the yearlong development process, Antigua, along with the U.S. Solheim Team, created the team uniform concept. This involves choosing fabrics and designs appropriate for the field of play during a particular time of year in a specific seasonal climate. Antigua also developed samples and the will fit of each potential team member in advance of the final team selection, a process that involves two separate fitting and alteration sessions at separate LPGA Tour events.

“It’s been great to work with the staff at Antigua, and they have always been a terrific supporter of the LPGA,” U.S. Captain Juli Inkster said. “They’ve been very enthusiastic about clothing the United States Team, and I’m really excited to see our players dressed in their red, white and blue.”

The final uniforms will consist of two separate apparel changes per day for the tournament rounds, as well as additional outfits for each day of the practice rounds.

“All of us at Antigua are very proud to have been chosen by the LPGA to design and develop the uniforms for the 2015 U.S. Solheim Cup Team matches,” McPherson said. “This opportunity is a great honor and undertaken with pride for Antigua company-wide as the development and logistics that are involved with each department play a critical part in the final execution of the process. We have had terrific directional meetings with LPGA staff and of course Captain Inkster.”