With record numbers attending the World Hickory Festival this year, competitors from around the world will play for the 15th World Hickory Open Championship title on Scotland’s Golf Coast next week. 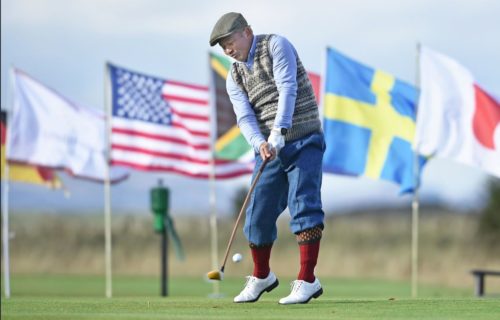 Last year, competitors battled it out over Luffness New and Gullane Golf Club, on East Lothian’s ‘Scotland’s Golf Coast’, before Swede Johan Moberg won in the closest hickory shoot out for almost a century as 10 players within 3 shots performed for a £6,000 purse, for what was a historical moment in golf.

With players from over 13 countries from around the world, from as far as the USA, Japan, China and Scandinavia, competition will be fierce again this year. The scores at this event are impressive scores in any period, but even more surprising when achieved with clubs that date back 100 years.

Skilful players such as last year’s winner Johan Moberg, Fraser Mann and former Masters Champ Sandy Lyle are still able to hit powerful near-300-yards yard drives and record scores of as little as 67, although this has only been achieved twice in the tournament’s history. Other categories include the Junior title, the World Hickory Senior title (50 and over), as well as the for the title of the Honourable World Hickory Champion, 70 and over.