Tony Jacklin’s personal selection of the golfers who have made the greatest contribution to The Ryder Cup throughout its history will form the ‘Tony Jacklin Ryder Cup Collection’.

The Collection will consist of oil painted portraits by world renowned golf artist Joe Austen and will be permanently exhibited in the Austen Gallery of Champions in Macdonald Rusacks Hotel, a few feet from the 18th fairway of The Old Course. 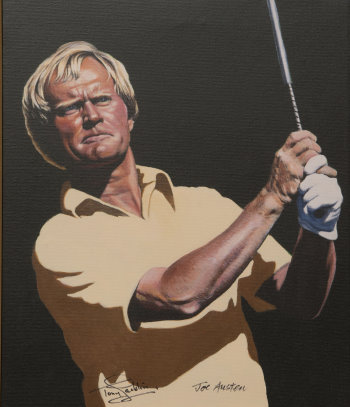 Further champions will be added to the growing Collection throughout 2014 and announced at a later date.

Tony Jacklin, said: “It goes without saying that the Ryder Cup is very close to my heart and I strongly believe that the competition would not have become the worldwide phenomenon that it is today without the sporting greats of the past like Samuel Ryder, Abe Mitchell, Walter Hagen and so many others.

“The rich history of the Ryder Cup interests me greatly and the idea of capturing this legacy for generations to come inspired me to work with Joe Austen. It is with this collection that I hope to honour both the historical champions and the present players who have made, and continue to make, the greatest contribution to the Ryder Cup.”

“The Austen Gallery of Champions is also an ideal location to showcase this Collection at Macdonald Rusacks Hotel due to its position by the 18th fairway of The Old Course in the Home of Golf.”

Exclusive Limited Edition Prints of the Collection, co-signed by Tony Jacklin and Joe Austen, are being produced in order to pay tribute to the golfers selected and to celebrate the return of The Ryder Cup to Scotland. The prints will be available to purchase from www.rydercupcollection.com.

“With the acclaimed Rocca Bar & Grill restaurant and many of our bedrooms overlooking the 18th fairway of the Old Course, Macdonald Rusacks Hotel attracts golfers from around the world.  The decision by such a world renowned artist to place the Ryder Cup Collection permanently within our hotel is a tremendous honour and I am sure will prove highly popular with our guests and visitors alike.”