Scotland’s best-loved comic strip character has been transformed into an American golf legend for The 147th Open to raise money for a children’s hospital charity. Artist Peter Davidson has designed a seven-foot Ben Hogan-themed statue of Oor Wullie and gifted it to The ARCHIE Foundation, a charity that supports sick children across the north east of Scotland. 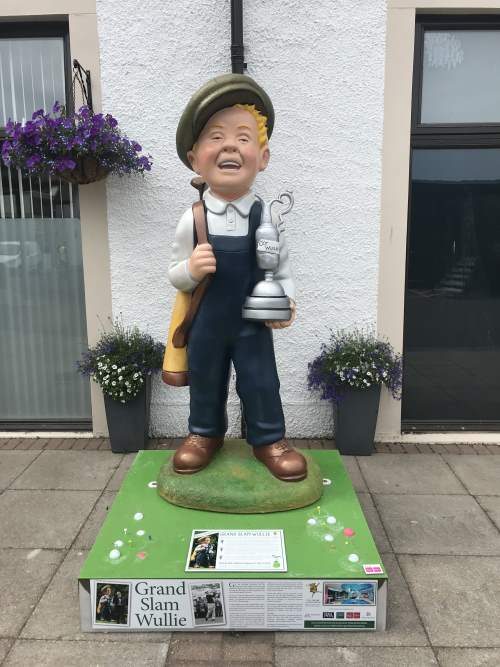 Oor Wullie is the cheeky, spiky-haired star of a comic strip of the same name which has appeared in the Sunday Post newspaper for more than 80 years. The statue, entitled Grand Slam Wullie, is taking pride of place outside Carnoustie Golf Hotel this week during The Open.

It is hoped that some of the world’s best golfers will sign the sculpture this week, making it a collector’s item that will be auctioned off to raise money for the charity’s Tayside Appeal, which has a target of £2m to build a Children’s Theatre Suite at Ninewells Hospital in Dundee.

The statue is a one-off tribute to Hogan, one of the best golfers of all time and one of only five who have completed the Grand Slam of winning The Masters, The Open, the US Open and the US PGA Championship.

Among Hogan’s nine major championship victories is a win at The Open at Carnoustie in 1953, with a performance that’s considered among the best Open achievements of all time.

Artist Peter Davidson, an illustrator with Scottish newspaper publisher DC Thomson, has drawn the Oor Wullie comic strip for over 50 years. He said: ‘In the early discussion with the R&A we thought it would be good for Wullie to hold his own homemade Claret Jug with a sink plunger base – his version of the famous Open trophy.

‘The fact that The Open is at Carnoustie this year, where Ben Hogan won all those years ago, was also part of the thinking. I hope it makes people smile when they see him.’

ARCHIE’s Chief Executive David Wood, said: ‘We’re very grateful to Peter for designing Grand Slam Wullie, and to the R&A and Carnoustie Golf Hotel for allowing us to display him outside the hotel during The Open.

‘We’re getting ever closer to our £2m goal for creating a new children’s theatre suite at Tayside Children’s Hospital. With the signatures of some of the world’s best golfers on it, the statue could help us reach our target when it is auctioned, and we’ll be able to make the experience of having an operation as good as it can possibly be for thousands of local children every year.’

The auction will take place online later this year. If you are interested in bidding or would like more information on the auction, email grandslam@archie.org