Royal Dornoch In Drive To Protect Its History

The historic Royal Dornoch Golf Club is ensuring its illustrious past is not forgotten by future generations.

The famous and internationally-acclaimed club held a series of celebrations in 2016 to mark 400 years of golf being played on the town links. The final act was to bury a time capsule with a host of memories looking back over the four centuries.

A specially-commissioned stone marker has now been put in place, pinpointing the spot where the time capsule has been buried, with the instruction that it is not to be opened until 2116.

The marker, which was crafted from Huntly granite by local Golspie firm Sutherland Stonework, was officially installed this week by Royal Dornoch captain Alan Ramsey and general manager Neil Hampton.

Included in the capsule are a mobile phone loaded with photos of the course, clubhouse and staff; a handwritten letter from the captain, local whisky and information about the course, its design, fees and future plans.

Collages from local Brownies and Boys Brigade, pictures from the 400 year celebrations and pieces of Royal Dornoch tartan and tweed are also included, as is a thesis written by PhD student Wade Cormack on the history of golf and other sports played in Dornoch and elsewhere on the Moray Firth coast. The three-year research project, carried out for the

University of the Highlands and Islands, was part-funded by the golf club.

The time capsule is buried at the start of the path which leads from the 18th green to the clubhouse, so that players will walk past the spot each time they play. 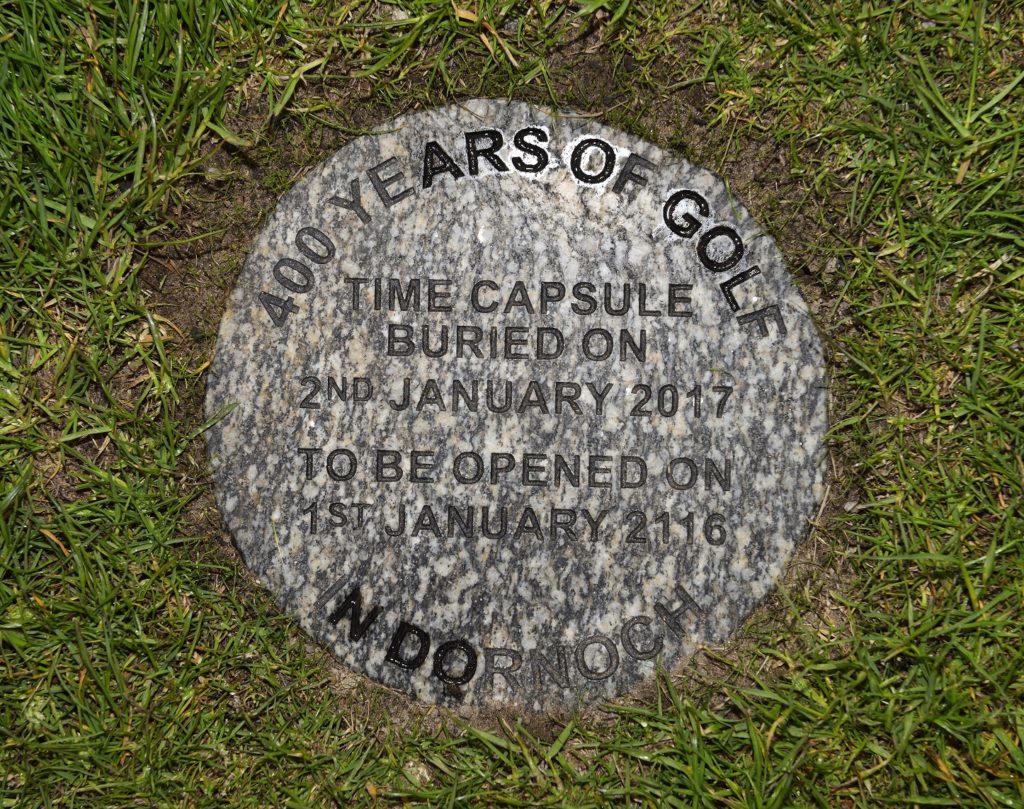 Neil Hampton said: “We take great pride in the fact we are one of the oldest locations where golf has been played in Scotland. The contents of the time capsule provoked a bit of discussion in the club as we have such a long and illustrious history to cover. Whoever opens it in 2116 will get a detailed account of how the course and Dornoch have changed over the last 400 years as well as the 100 years since it was buried.”

The first known reference of golf being played in Dornoch is in 1616 when John, the 13th Earl of Sutherland, was sent to school in the town and his expenses showed that ten pounds annually was provided for “bowes, arroes, golff clubbes, and balls, with other necessars for his L[ordship’s] exercise”.

The expenses were paid by John’s uncle, Sir Robert Gordon, an influential man in the court of King James VI and I, who became the earl’s tutor after the death of his father.

Dornoch Golf Club was formed in 1877. The course was then only 9 holes long and in 1883 the annual subscription to the club was 2/6 (12½p) and the annual income was £9. In 1886, the veteran champion golfer, Old Tom Morris, was invited to Dornoch to lay out a more fully planned golf course.

About the turn of the century, John Sutherland, the club’s secretary for more than 50 years, and his committee, had to re-model the course as a result of the newly-introduced faster, rubber-cored ball.

Royal status was granted in 1906 by King Edward V11, through the influence of the Duchess of Sutherland, a good friend to the club.