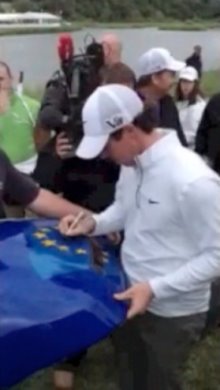 A Club Car golf car used during the 2010 Ryder Cup and featuring the signature of Rory McIlroy has joined a unique collection of vehicles on display in Ireland.

The Precedent car, used by Team Europe’s Vice-Captains, will go on display alongside golf buggies used to transport Nelson Mandela, Her Majesty Queen Elizabeth II, President Bill Clinton and Bono from U2.

The collection belongs to The Buggyman, Club Car’s sole distributor in Ireland, and will go on show at the company’s showroom in Munster.

“This car commemorates an important piece of Ryder Cup history, and joins a number of Ryder Cup cars we have on display, including Team Europe and Team America cars from The 2006 Ryder Cup at The K Club,” said The Buggyman’s Liam Ross.

“What makes this particular car special is that Rory McIlroy signed the car during The Irish Open at Carton House.”

Club Car has been associated with The Ryder Cup and The European Tour since 1999, and The Solheim Cup since 2007, playing its part in supporting some of the game’s most iconic moments.

The Buggyman has over 3,000 cars in use in Ireland spread across a broad spectrum – from clubs such as Naas with a few carts, to large-scale operators such as Carton House and the K-Club with fleets of over 120 cars.

Over the years, The Buggyman has won over 12 international manufacturer awards for ‘Best Backup Service’ and ‘Customer Commitment’