An extremely rare piece of Ryder Cup history, found under a newspaper at the bottom of a drawer in Florida, is for sale at Bonhams Sporting and Golf Memorabilia sale at Chester on 20 October 2010.

It is a programme for the ‘Bon Voyage’ dinner held for members of the US team on 9 April 1929 as they prepared to cross the Atlantic to play only the second Ryder Cup Match in the competition’s history.

The programme (estimate £2,000-4,000) was found in a 50 year old hand carved Chinese chest which was given to the vendor in 2006. The drawers had been lined with newspaper and the programme was found underneath one of the pages when the chest was being cleared out.

The ‘Bon Voyage’ dinner was held at the New York Athletic Club and the programme features autographed photographs of the entire US team including the captain, golf legend, Walter Hagen.

The 1929 Ryder Cup match took place at the Moortown Golf Club, Leeds on 26 and 27 April.  The US team was defending the title it had won two years earlier in Worcester, Massachusetts.  Hagen went into the contest  unbeaten in match play for the year and confidently arranged to be paired with the British captain, George Duncan. His confidence was misplaced.  Duncan won and the UK side went on to square the series. 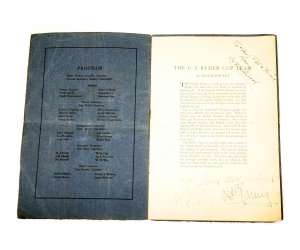 Bonhams golfing specialist, Kevin Mcgimpsey, said, “This is an extraordinary find and is likely to be the only surviving example of the Bon Voyage dinner programme.  The fact that it was autographed by the entire team makes it even more special.  The programme is in very good condition and I expect it to have wide appeal.”

Nearly 30,000 PGA Professionals, golf business owners, industry executives and retailers from more than 86 countries came together to meet with more than 800 golf companies at the 70th PGA Show held in Orlando, Florida from January 24-27.