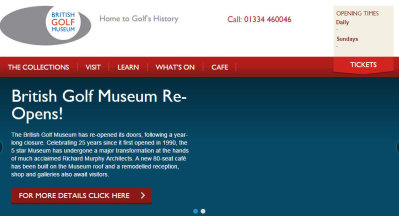 The British Golf Museum at St Andrews has re-opened its doors, following a year-long closure. Celebrating 25 years since it first opened in 1990, the 5 star Museum has undergone a major transformation at the hands of much acclaimed Richard Murphy Architects.  A new 80-seat café has been built on the Museum roof and a remodelled reception, shop and galleries also await visitors.

Edinburgh-based company, Campbell & Co., have re-designed some of the galleries, introducing a more contemporary feel and interactive focus.  With the 144th Open Championship just around the corner, a special exhibition has been installed, highlighting the career of five-time winner, Tom Watson.

With panoramic views, taking in the 1st tee of the Old Course and West Sands beach, the Café at the Museum will offer locally sourced produce and a Scottish menu, including an Afternoon Tea. The Café at the Museum will be run by Ampersand Catering, whose prestigious portfolio includes the Palace of Holyrood House, London Zoo and Kensington Palace.

The Museum shop will now stock Official Open merchandise year round, alongside a selection of gifts for golfers and non-golfers alike.

Bill Black, Director at Richard Murphy Architects, said: “The design is conceived as a simple pavilion in the landscape.  The orientation of the café has been key to the design, maximising the views across the Old Course for the café visitors, whilst leaving uninterrupted views to the beach beyond for the adjacent existing buildings at the edge of the town.”

Angela Howe, Museum & Heritage Director commented: “The café, the re-designed galleries and shop herald a new chapter in the Museum’s history and we are excited by the direction we are going in.  The building has been transformed from a semi-hidden bunker to an elegant addition to the landscape.  The Museum has a stronger presence, which we hope will appeal to visitors and the local community.’’