Ryder Cup Europe and The Ryder Cup Organising Committee in France have jointly launched The Ryder Cup Green Drive – the event’s sustainability programme – ahead of the biennial contest between Europe and the United States of America in Paris from September 25-30, 2018.

Building on months of behind the scenes planning, stakeholder and supplier engagement, the launch is accompanied by the release of a new Sustainability Policy and dedicated webpage at www.rydercup.com/sustainability 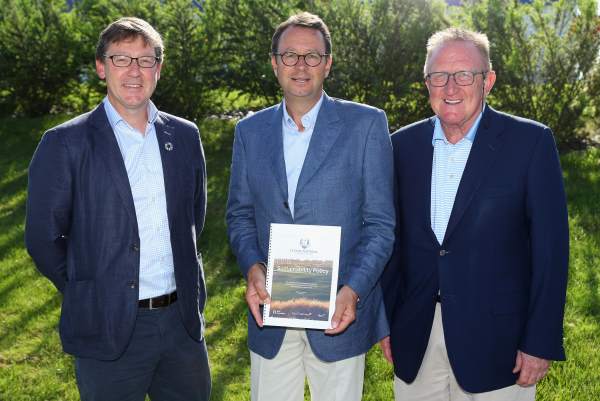 Ryder Cup Europe Director, Richard Hills, said: “We were one of the first major sporting events to sign up to the French Government Charter for eco-responsible events at the time of the Open de France last year, and since then we have been working closely with our delivery partner, GEO Foundation, to put that into action.

“With the support of our partners, suppliers and contractors we look forward to delivering one of the greenest, cleanest and most sustainable editions of The Ryder Cup yet.”

The Charter is a joint initiative of the French Ministry of Sports and World Wildlife Fund France and has now been signed by over 30 different national and international associations and event organisers.

Speaking on behalf of The Ryder Cup Organising Committee in France and the Fédération Française de Golf, Pascal Grizot added: “Sustainability is a key pillar of the French Government and the Fédération Française de Golf, so it is vital that these important issues are being addressed through the Green Drive – across venue operations at Le Golf National; staging; communications; and the outreach and longer-term legacies of the event.”

Jonathan Smith, Executive Director at GEO Foundation, said: “In line with the 15 commitments of the government Charter, The Ryder Cup is taking a comprehensive approach, addressing a wide range of priority environmental and social responsibility issues.

“The top-level commitment is supported by detailed procurement policies that will push innovation in the event’s supply chain. We are sure this will resonate with fans as the Green Drive comes to life closer to the event.”