Ryder Cup organisers are confident that any fears over transporting the 55,000 daily spectators, staff and officials in and out of Le Golf National every day during the tournament this September have been overcome, writes Ross Biddiscombe 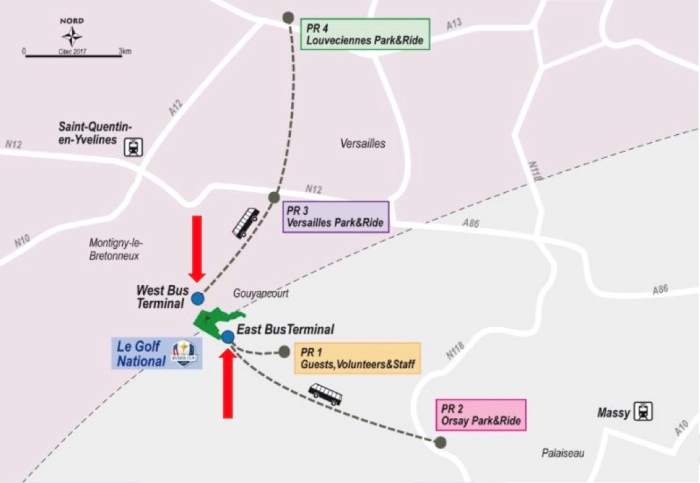 “The transport plan is amazing – all the hard work was done months ago,” says Golf National general manager Paul Armitage. “That was when we persuaded the local transport authorities to give us better routes near the course, more buses and trains, necessary road closures and sufficient car parking space. Basically, we explained just how big the Ryder Cup will be and the authorities have responded. The main thing to do from now until September is to get the word out.”

The vast number of people travelling to and from Le Golf National is unprecedented in the history of the Ryder Cup. Over 40,000 people per day made their way to Gleneagles in 2014 and the same number travelled daily to Hazeltine in Minnesota two years later.

However, Le Golf National is the first stadium-built golf course in Europe to stage the Ryder Cup and it was always the plan for this match to break all attendance records. Armitage estimates that, from central Paris, the journey should take around one hour door-to-door.

“There are always going to be a few bottlenecks at times when so many people are travelling in the same direction,” says Armitage, “but as fast as we can get 100 people on and off the hundreds of buses that will be used during the week, the less delays there will be.”

One key issue has been informing the French fans, who would normally travel by car and park within a few hundred metres of the course, that the Ryder Cup was different. A special French media press conference took place at the Open de France earlier this month to underline the transport plan in particular in an effort to get the message out to fans well in advance.

“The numbers of people coming during the week don’t frighten us,” says Armitage, “but this is not the French Open when fans park their cars close by. Parking is limited to a first-come, first-served basis in the three park-and-ride areas.” Also, local fans have also been clearly told that no one will be able to reach Le Golf National on foot with all the surrounding roads being ‘no parking’ zones. However, you can cycle to the park-and-ride area at Toussus-le-Noble and then catch the free bus, but bring your own bike lock, says Armitage.

The core of the transport plan is to have 60% of fans arrive by train either to Saint Quentin-en-Yvelines or Massy, both served by the RER network. Train travellers are then transported by a vast fleet of buses for the final few miles either to the West or East entrances. A reduced-price Ryder Cup Travel Card for the week will be available at just €40.

The Card provides unlimited travel on trains, metro and buses, in Paris and all fare zones, including transport to and from Charles de Gaulle Airport, Paris Orly Airport and Gare du Nord Station, as well as all TGV stations. It is will also be valid for all trains going to and from Saint-Quentin-en-Yvelines Station and Massy-Palaiseau Station. The Card will be valid from the Monday of Ryder Cup week until the Sunday match day.

All transfer bus rides from the stations and park-and-rides to the course are free and will take between 10 and 15 minutes. The four park-and-ride areas (three for the public and one for VIPs only) will hold 11,400 cars, again using one of the two entrances. However, cars will have to pay €20 from Tuesday to Thursday and €40 for match days. Motorbikes can park for free in two of those areas.

For those with money for a taxi, there will be a pick up/drop off area in two of the park-and-ride areas, those located in Toussus-le-Noble and Versailles. There is no need for a parking pass and the service is also available to anyone being dropped off by a private car.

Care and attention to golf fans also extends to wheelchair users travelling by car (there a limited amount of on-site parking spaces – contact rydercup@europeantour.com) and anyone requiring an electric mobility scooters and manual wheelchairs (these can be reserved at www.eventmobility.org.uk)

Pictured top: One of the massive hospitality units under construction