The star-studded line up for the Opening Ceremony of The 2018 Ryder Cup, revealed today, is set to ensure golf’s greatest team contest gets off to the most dazzling start in its 91-year history.

Hosted by French footballing legend David Ginola, the one-hour Ceremony, which will be followed by a special 90 minute concert featuring the Kaiser Chiefs and Jain, will begin at 5pm French time on Thursday September 27 in a purpose built arena at Le Golf National, the course outside Paris which will host the 42nd Ryder Cup between Europe and the United States over the following three days. 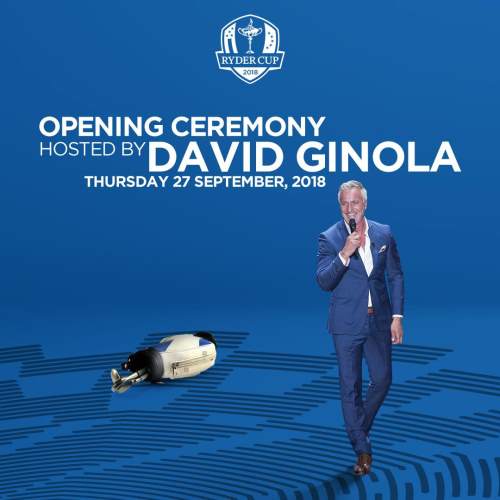 It is expected that upwards of 40,000 people will be on-site with millions more tuning in around the world to watch the television spectacular created by Executive Producer Matt Wilkinson, whose production credits include Soccer Aid for Unicef and the FIFA Awards, as well as previous collaborations with the European Tour in the shape of GolfSixes and the Hero Challenge.

As well at the introduction of the two teams by Captains Thomas Bjørn and Jim Furyk and the reveal of their respective line-ups for Friday morning’s play, the Opening Ceremony will also feature video segments showcasing not only the history of the contest and Paris, but also the current teams alongside golfing legends from both sides of the Atlantic.

Last December Ginola assumed the hosting role at the Ballon D’Or in Paris, the ceremony which crowns the best footballer in Europe, and is also the front man for the hugely successful ‘France’s Got Talent’ (La France a un incroyable Talent). The 51-year-old is therefore the perfect host to bring the worlds of sport and entertainment together.

The man who won 17 caps for France and who plied his trade on both sides of the English Channel, most notably with Paris St Germain and Tottenham Hotspur, admitted he was looking forward very much to the occasion, especially as he is a keen golfer himself.

“I was delighted and honoured to be asked to be host of The Ryder Cup Opening Ceremony and I am very excited about the show itself as it is shaping up to be a truly wonderful event,” he said.

“As a proud Frenchman too, I am delighted to see my country once again taking centre stage in terms of a global sporting occasion. We have shown in the past, with our hosting of World Cups in both football and rugby, that we put on a great show. I know The Ryder Cup will be no different.”

The evening’s concert will run from 6.30pm until 8pm, and fans wishing to attend the Opening Ceremony, the concert, and the final day of practice for both teams on Thursday September 27, can still do so. Tickets are available from www.tickets.rydercup.com