The end of a seven-year journey is in sight. Everyone working behind the scenes at Le Golf National is taking one last deep breath today in readiness for the start of the busiest week in the life of the golf course, writes Ross Biddiscombe 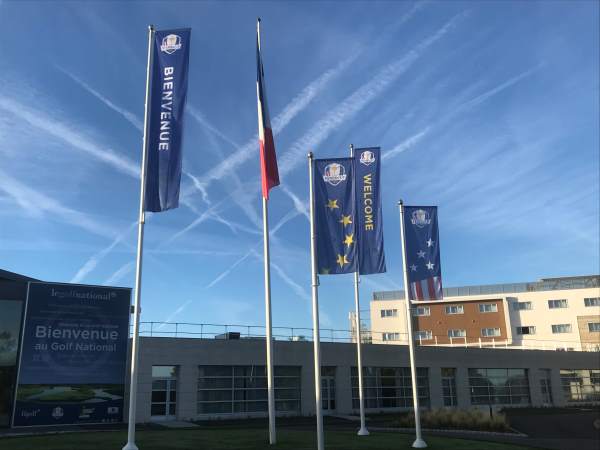 Grandstands, hospitality suites, the tented village, the giant merchandise structure, the huge TV screens, the miles of electric cables and everything else is just about set and only the last-minute refinements to the course and all the buildings will now take place.

Also, the Ryder Cup workforce has begun to arrive including over 100 extra greens staff, thousands of volunteers and the world’s media, particularly the technicians and producers who will help send live pictures to millions of fans around the globe.

One of the first official events of the six-day Ryder Cup week will be the first of many press conferences for the two captains. The USA’s Jim Furyk and Europe’s Thomas Bjorn will sit in the media centre in front of cameras, radio mics and the print press on Monday at 4pm, the same day as many of the players and caddies will arrive. Team photos and many more press interviews follow on Tuesday and Wednesday.

Tuesday will also be the time for a celebrity match and some hour-long team practice sessions which are usually only a few select holes. The teams are on the course at different times (USA starting at 9am and Europe from 10am) and the players are often in a jovial mood as they settle into the team atmosphere, something which is especially difficult for those who have flown over the Atlantic after the intensity of the FedEx Cup final in Atlanta..

Wednesday is taken up by a Golf Sixes event involving the two Junior Ryder Cup teams who will have been playing their own competition at the Disneyland Paris golf course on the previous days. There will also be some fan training zones open today and teams will again practice for a few holes in the morning.

The first ticketed fans arrive on Tuesday and around 55,000 people per day will file into the golf course. Many innovations are in place to help them at this 42nd Ryder Cup. The main new idea is that fans can follow all the action during the week on the Ryder Cup App which offers live scoring, a live blog, news, video and photos. There is also a live radio broadcast on the App with receive hole-by-hole updates plus an optional alert system. The App is available on both IOS and Android.