After months of rumour and speculation it has been confirmed that The Wentworth Club has been purchased by the Reignwood Group of Beijing for a price believed to be in the region of £135m.

Chinese-Thai businessman Chanchai Ruayrungruang leads the privately held Reignwood Group, whose many interests are believed to include the ‘Red Bull’ franchise for China. The Group owns the Reignwood Centre (pictured) in downtown Beijing and the Reignwood Pine Valley golf course situated in Changping, a 40-minute drive from the capital, and property both in China and overseas. Featuring 54 magnificent holes designed by Jack Nicklaus, Reignwood Pine Valley includes the Reignwood Polo Club, luxury golf villas, a five-star hotel, health management and fitness centre, and a private business jet service for members.

Richard Caring, who purchased The Wentworth Club in 2004, is quoted as saying: “In Dr Chanchai and his team at Reignwood, I know Wentworth is in great hands for the next chapter in its amazing story and I look forward to staying on as Non-Executive Director.”

Dr Chanchai said: “Wentworth is a key strategic acquisition for our rapidly growing luxury lifestyle division, whose unique culture we are dedicated to preserving.” A senior Reignwood spokesman told GBN.com’s Asian correspondent that he did not envisage the introduction of sweeping initial changes in the day-to-day running of the Wentworth club. He continued: “We are not planning major changes to the existing operational staff as they currently are operating in a stable state. We will, instead, provide more support  to the existing staff in order to stabilise the operation of the club.” 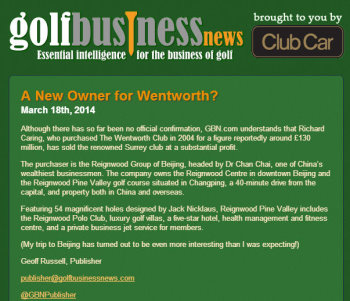 It was on March 18th that GBN.com informed subscribers to its Newsletter that the sale of The Wentworth Club was under negotiation. To become a subscriber please sign up here.

The European Tour owns the property right next door to the main Wentworth clubhouse and uses the building as its headquarters.