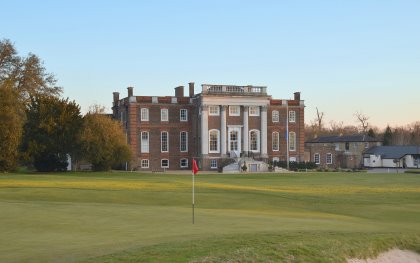 The Richmond Golf Club has purchased the freehold of its course and clubhouse from The Crown Estate, guaranteeing current and future members a lasting future at its stunning parkland home.

In a move described by the prestigious London club as “the most significant development in its 125-year history”, the club has completed a deal to buy its 300-year-old early Georgian clubhouse, Sudbrook Mansion, and the surrounding land on which the golf course stands, Sudbrook Park. The purchase price is confidential.

An overwhelming majority of members voted in favour of buying the freehold when the club first met to discuss the possible purchase at an Extraordinary General Meeting in June last year. Around 300 members voluntarily subscribed to a loan note scheme to finance the purchase, which was finalised almost 125 years to the day after golf was first played at Sudbrook Park back in April 1891.

David Hill, the chair of The Richmond Golf Club at the time of the deal in March, said: “This is undoubtedly the most significant development in our 125-year history.

“At a time when some other clubs are closing, selling land or changing the rights of their members, we are delighted that the future of the club is now even more safe and secure and our members will be able to play golf here for as long as they wish to do so.

“What is most pleasing is the way that it has all been done. We raised the money to finance the purchase, not from institutions, but from as wide a base of the club’s members as possible. Moreover, under the new arrangements, all members will continue to hold an equal stake, regardless of their contribution to the financing of the acquisition.

“We have been careful to ensure that the changes needed to support the purchase will maintain the unique character and ethos of the club that are so cherished by our members.  Potential new members should not be put off – they will be welcome to, but will not be expected or compelled to, participate in the loan note scheme.

“All members should all be very proud of what we have achieved together.”

The completion of the freehold purchase is perfect timing for the club as Richmond’s 125th anniversary celebrations move into full gear over the coming months with a series of events and golf days being staged.

Situated just nine miles from central London in the village of Petersham, The Richmond Golf Club is a private members’ club that offers an outstanding golf experience and where new members and visitors are warmly welcomed. The club is steeped in history, with politicians and royalty including the future King George VI (captain in 1924) among its early members.

Set in parkland adjoining Richmond Park and Ham Common, the par-70 course, which was originally laid out by prolific golf architect Tom Dunn in 1891, provides one of London’s most challenging and beautiful parkland layouts.