Set in the popular touristic area of Novo Sancti Petri, Sancti Petri Hills Golf Course is located at Chiclana de la Frontera Cádiz, 55 Km from Jerez de la Frontera airport. The area is renowned for its beaches and there are several golf courses. 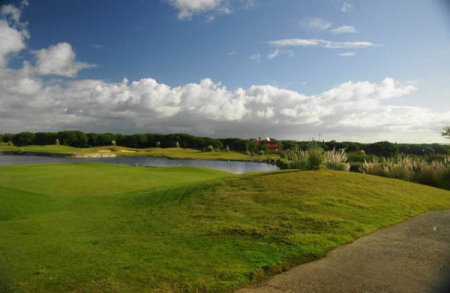 Tourists that visit this area have a high purchasing power. The environment is discreet with a wide range of luxury hotels, restaurants and leisure areas, close to a semi-virgin beach, the best in the Andalucian coast.

Sancti Petri Hills was designed by Spanish Ryder Cup star Manuel Pinero who played in the Matches of 1981 and 1985, when he claimed four points out of five for the team which captured the trophy from the United States for the first time since 1957.

The course, which was opened in 2006, covers an area of 39.8 hectares and the holes, measuring a total of 4,767 metres (par 68), are routed around eight lakes and three long estuaries that provide an ideal playing environment for both experienced players and beginners.

The clubhouse includes a café and restaurant.

Novo Sancti Petri Hills offers a great opportunity for an investor looking to expand their business presence in Spain. The Club, which re-opened last July, is presently operated as a pay & play facility and is owned by Banca March, a Spanish bank based on Mallorca.

Based on the results of this first year’s trading the bank is seeking offers in the region of €4,000,000

Woodhall Spa Golf Club, the home of England Golf and the site of the National Golf Centre, has been awarded GEO Certified Status for its outstanding work to preserve nature, conserve resources and play an active role in supporting the local community.