How to prepare for 10 days of ‘birdies, sweat and gears’

Fundraising for this charity, the Golf Foundation, writes Ben Evans, PGA Professional Luke Willett is aiming to complete a unique 10-day golfing challenge to cycle to all 14 Open Championship venues carrying his clubs on his back and then playing a full 18 holes on each course. #TheGreatBritishOpenChallenge starts on October 18 at Carnoustie, where Luke will tee-off at 7.30am, and then after his last putt has dropped, he will cycle 23 miles to St Andrews before playing The Old Course that afternoon. 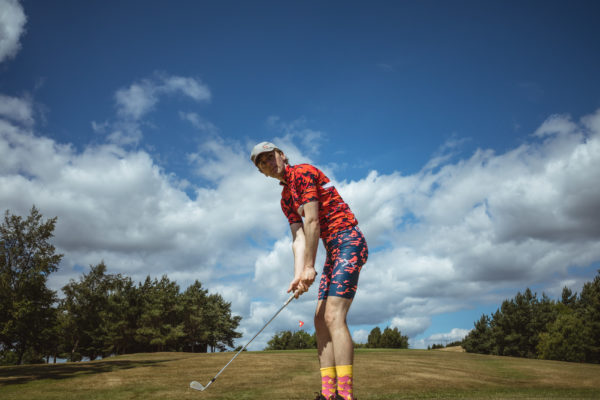 Ten days of ‘birdies, sweat and gears’ will involve a gruelling 804 miles of road cycling, in daylight and darkness, on unfamiliar roads in exposed conditions in all weathers. After playing the seven Scottish courses Luke will sail to Northern Ireland and back to play Royal Portrush, before cycling many more miles south via the North West of England to complete his challenge at Prince’s and then finally Royal St George’s, both on October 27.

Luke, a 34 year-old PGA Professional at Hampstead Golf Club is nicknamed ‘The Iron Golfer’. He has an infectious, positive personality and a ready sense of fun. He’ll need it… However, his adventurous spirit is sure to be attractive to those people he meets and plays alongside on the iconic Open links courses on his journey. The golf-lovers who will care about the message that #TheGreatBritishOpenChallenge is all about raising money to help the next generation of young players, the kids of today of all abilities and backgrounds who the Golf Foundation is encouraging into golf. The Golf Foundation would add that its role isn’t simply about numbers of players coming into the game, arguing that the life skills inherent in the sport are providing the charity with the opportunity to change the lives of the young people it supports. It’s a message that Luke has tapped into as a father of three young children himself.

Due to his busy job as a PGA coach and all the commitments that come with having a young family, Luke isn’t able to guarantee that he can train at great length every day for the challenge. However, he describes himself as naturally highly active and this, plus his desire to live each day to the full – a philosophy to embrace life’s adventures – means his commitment to exercise and health is a central pillar in his life as a whole. For example, for Luke, the ‘school run’ can be a literal term; happy to run with his daughter the mile to the school at her pace, and then run the mile back a little faster. “I’ll run between golf lessons while waiting for the next client,” says Luke, “I’ll fit in runs to suit a busy schedule, while currently I’m cycling the 40 mile round-trip into work every day.”

Luke will stretch his tall frame for 30 minutes every evening, with the television on – happy to be sociable with the family, multi-tasking, and sometimes he’ll set up his bike on rollers and enjoy a film or some sport on TV while cycling at speed!

Last Saturday, Luke was at his daughter’s school with other parents and they took part in a charity ‘Colour Run’; 5km in which spectators throw multi-coloured flour at the runners (a 19 minute run for Luke, though being covered in flour wasn’t a piece of cake…). After an early night that day, on the Sunday morning Luke set the alarm for 2.45am, setting off at 3.30am to Devon where he took part in a British Speedgolf tournament at Fingle Glen Golf Club, playing 18 holes in 40 minutes, recording a score of just +4, 74, for the round. 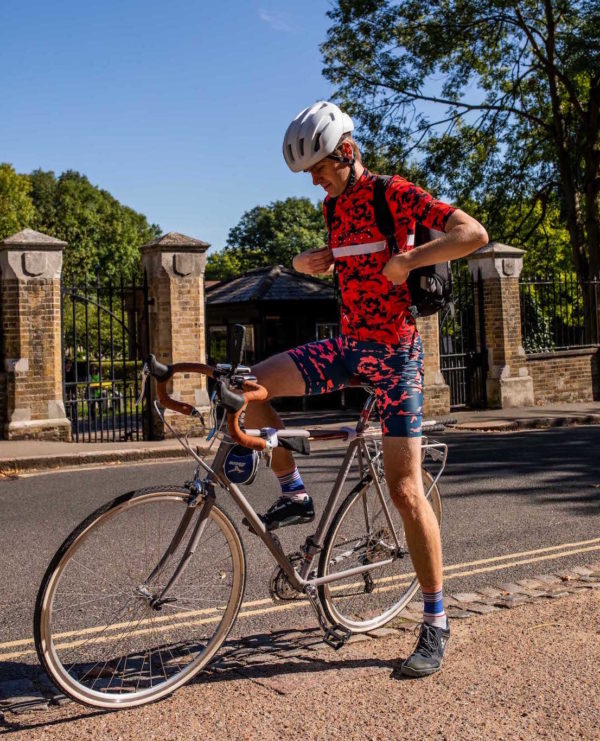 The weekend before Luke and a pal went to The Belfry and he completed a 40-mile cycle ride, a one-mile swim (and he doesn’t actually like swimming) and played the Brabazon course in just 60 minutes.

This kind of preparation helped Luke create ‘The Iron Golfer Challenge’ a while back; this was a three-mile swim in Wastwater at the foot of Scafell Pike in the Lake District, followed by a white-knuckle ride that took in England’s steepest road Hardknott Pass and finished off with 18 holes at Windermere Golf Club, all in a single day.

Luke says: “With golf and other forms of health and exercise, many people are too results-focused. I’m not a big fan of the gym for this reason. For me, it is recognising the vast health benefits of being active, taking good exercise whenever you can; if that’s cycling to the shops and back regularly that’s great. Eating healthy foods and the joy of keeping active with friends and family. In golf, too many weekend golfers at times can lose sight of the pleasure of swinging a club, striking a ball in the fresh air in beautiful surroundings. It’s not all about whether you are one or two shots better than last week.

“Golf is a fantastic sport with lasting physical and mental health benefits and we should be shouting this from the rooftops. I would like to think that by doing The Great British Open Challenge it will help to highlight the health benefits for young people and also the sense of personal adventure that the sport can bring its players of all ages. It is about the journey, loving being absorbed in the present; not just the numbers on a scorecard.”

Luke added: “This next challenge is a huge step into the unknown for me, which is why I am so excited. Because of the difficult and unique nature of it – playing all 14 Open Championship venues – I had the opportunity to fundraise for charity and I thought the Golf Foundation would be an excellent choice. Their team is working to change the lives of young people by introducing them to golf; kids from all backgrounds and abilities. And just like my challenge, it’s a big task but a very exciting prospect that is perhaps worth supporting.”