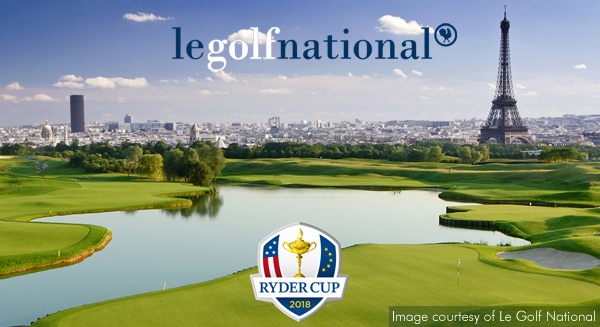 A Ryder Cup within touching distance of one of the world’s most exciting, iconic and historic cities – yes, the 42nd Ryder Cup at Le Golf National was truly like no other, writes Ross Biddiscombe. Not once since Samuel Ryder donated the trophy for the inaugural match in 1927 have the players turned up in a place like Paris. In 2012, the host city was big (Chicago, although that’s a good 40 minutes from Medinah) and, in 2014, many fans certainly stayed for the week in Edinburgh and Glasgow in order to attend Gleneagles (again, a fair way away), but the first French Ryder Cup has been a ground breaker.

Thirty kilometres from the centre of Paris, Le Golf National is really in the suburb of Guyancourt which is part of the town of St Quentin de Yvelines, so they were technically the host rather than Paris. Hence the local burghers of St Quentin held a short press conference to welcome the global media and make that very point. It’s a little like the Medinah situation or the 2006 World Golf Championship at The Grove in Hertfordshire being advertised as in London.

So, the questions are: can a huge capital city be a good host for an event like the Ryder Cup and, if so, will this be the European venue strategy going forward?

The European Ryder Cup organisers loved the French bid: they adored Le Golf National as a stadium course for 50,000 fans per day; there was an IMG-formulated document of detailed legacy ideas to develop the game in France; and the idea of being close to Paris was the final element of seduction. It was a similar story for Marco Simone Golf Club in Rome, chosen for the 2022 match: sow the seeds of golf in relatively barren land; employ IMG to underscore all the positives; be able to stand on a couple of tee boxes and stare at the top of St Peter’s Basillica in the city centre 20 kilometres away; and enjoy the Trevi Fountain and other Roman delights in the evenings.

Even the PGA of America understands this Cup-in-the-Capital strategy because Bethpage Black, just 35 miles from downtown Manhattan in New York City, will stage the 45th match in six years’ time.

The evidence from Paris is still to be gathered in detail and much of it is likely to be favourable, but there is also an opinion that when a sporting event like the Ryder Cup comes to such a huge city, it can feel a little lost. Driving and walking around Paris city centre last week and you would be hard pushed to find evidence of golf’s greatest spectacle. The Ryder Cup Fan Zone at the Hotel de Ville was a great success and banners along boulevards near the Arc d’Triomphe were impressive, plus there were logos aplenty at Orly Airport. However, it’s just impossible to achieve blanket coverage in a city the size of Paris.

I talked to a few random Parisian sports fans about the golf event on their doorstep and they had more interest last week in the schedule of football and rugby games. Not only that, but the Ryder Cup was battling against Paris Fashion Week and you don’t have to be Einstein to guess which subject is closest to the heart of the French public, golf or garments?

A capital city as large as Paris needs the FIFA World Cup or the Olympics to capture mass attention and even then, my Parisian friends said the 1998 World Cup (which, of course, was won by the French team) took a while to warm up the locals. The Olympics will come to France’s capital in 2024 and will be far more evident in the city because some of the events will be staged right in its heart. It’s likely the Olympic golf tournaments (also at Le Golf National) will do more for French golf than the Ryder Cup simply because of the power of the Games overall.

All that being said, the official bidding process for the 2026 Ryder Cup in Europe will start soon and the 2030 venue may well be announced at the same time, so will golf courses near capitals like Berlin, Amsterdam or Madrid be the favourites? Should the largest population centres of Europe be the target hosts with all their sophisticated transport networks, plentiful hotel rooms and add-on culture? Or are smaller cities better Ryder Cup partners?

Frankly, the city of Paris does not need the Ryder Cup. The need is the other way around. An estimated 30,000 visiting fans per day and the tens of millions of euros that they spend in travel, accommodation, food and a few souvenirs is not to be sneezed at for the Paris economy, but the Ryder Cup is not going to put the city on the world’s sporting map. It’s the same for every major capital.

How many new young Parisian golfers will emerge after last week? We may never know, but that is a huge reason to hit large population centres and the French Golf Federation will try hard to find out the development numbers. And, when it comes down to simple numbers, it’s tough to argue against what Le Golf National has delivered on almost every level – the French have set the standard. Not even Britain or Ireland could stage the match with so many people and the Albatros course could even take five or ten thousand more.

Yet there is something to be said for a smaller venue. The contrast between a big and small host communities will be made in two years’ time when Kohler stages the 43rd match. Whistling Straits is one of the most dramatic golf courses in North America with Lake Michigan on view from every hole, yet the whole community of Kohler has an official population of just 2,120 and is famous for manufacturing plumbing products. There is no Eiffel Tower equivalent. But the Ryder Cup in 2020 will dominate the town, the surrounding area and even much of the state of Wisconsin in a way that Paris could not.

So, that is the debate: is the most appropriate Ryder Cup host a big city or a small town, Paris or Kohler? Are the major cities with a custom-made course too big or are the tiny towns with classic courses on their doorstep just too small?

Adare Manor near Limerick (over 200 kilometres from Dublin, incidentally) is the early favourite for 2026 on the back of JP McManus’s reputation and relationship with golf in Europe, but another capital-type host is coming. And it might even be Paris and Le Golf National real soon. Certainly, the players agree. Rory McIlroy said in the after-match interview-fest that the course was made for this kind of event and “it would be very fitting to return here one day,” while Henrik Stenson noticed there were more Swedes in the crowd than any Ryder Cup “and maybe Paris is a popular place”.

When it comes to Ryder Cup venue choices, player support can be decisive, so let the bidding begin in what will be a fascinating process.