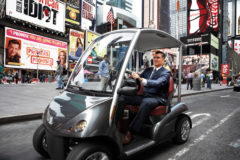 Built at the same factory as the Porsche Boxster and Cayman and with luxury features such as a super-car inspired steering wheel, a built-in refrigerator and hand-stitched seats, The Garia Golf Car is the ultimate machine in its class.

With a 25 mph top speed, The Garia LSV features a double wishbone front suspension, automotive style shocks and springs and a unique digital instrument cluster with all relevant driver information.

The Garia LSV features a drive train built by an Italian company that also produces Ducati gearboxes, and its components are made by the same company that supplies Aston Martin, Jaguar, and Volvo.

With automotive features unseen in the golf cart industry The Garia LSV has – as the first golf cart ever – entered the automotive league and earned its right to be called a car as opposed to a cart.