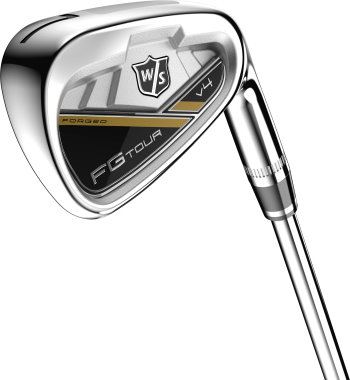 Having been designed as a precision line for Tour players, the latest forged irons from the brand with more Major wins than any other are now seen as a reliable option for all elite golfers looking for exceptional feel and greater ball flight control.

After vigorous testing of prototypes, the latest FG Tour V4 irons have been put into play already by Wilson’s Advisory members, including three-time Major winner Padraig Harrington and Kevin Streelman, who enjoyed two PGA Tour victories with the V2 irons. “The first prototype V4 iron I put in my hand confirmed we’re making adjustments to the right things,” said Streelman, who won the Travelers Championship in June with seven consecutive birdies.

The new irons incorporate an 18-gram tungsten sole weight from 3-iron through to 7-iron that lowers the centre of gravity and increases the launch angle without added spin. This results in greater height on long and mid-iron shots, producing a steeper angle of descent to hold greens and attack difficult pins. The upper portion of the face where no impact occurs has been thinned by 11% in order to reposition mass where it can optimise launch, spin and Moment of Inertia (MOI).

Weight has been moved lower and towards the heel and toe of the irons to improve forgiveness, although the mass remains concentrated in the impact area to maintain a solid, Muscle-back blade-like feel and provide workability on centre or close-to-centre impacts.

“It’s important that the V4 irons maintain the visual characteristics and specifications that our Tour Staff expect to see and their feedback has been very positive,” said Michael Vrska, Wilson Golf’s Global Director of Innovation. “Now more golfers outside the Tours can benefit from the innovations we’ve made to improve playability and performance for the better, feel player.”

The Wilson Staff FG Tour V4 utility irons are designed to help better players hit long shots into greens and control ball flight in the wind. Featuring similar cosmetics to the V4 iron, they incorporate a 7-gram adjustable weight in the centre of the sole to enable golfers to fine tune ball flight with personal fittings depending on the course conditions.

The utility models also have similar lofts, lies and swing weights for easy transition from iron to utility club, but the shaft lengths are longer as well as the blades which are also lighter. The soles and toplines are wider and slightly more offset for workability and forgiveness.

The extremely thin, responsive face is made from the strongest stainless steel available – Carpenter Custom 455 maraging – which creates a high Characteristic Time (CT) for improved ball speeds and distance. This premium material freed up weight so that mass could be moved low and to the toe for an optimised centre of gravity, supported by a 9-gram tungsten weight placed in the toe to eliminate any draw bias in the head.

The full range of Wilson Staff clubs can be viewed at www.wilson-staff.com