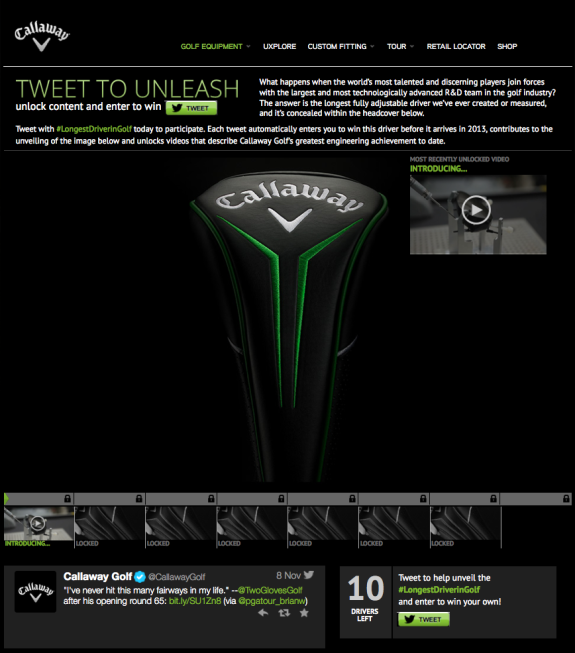 Callaway is engaging the company’s passionate and ever-growing fan base in the first-ever digital reveal of a product in the golf industry by using Twitter to launch its new, high-performance driver,

The “Tweet to Unleash” campaign unveils an image of the new premium driver, concealed under a head cover on the dedicated microsite www.callawaygolf.com/tweettounleash.

Fans and followers are encouraged to unlock more images of the driver through a Twitter campaign using the hashtag #LongestDriverinGolf.

Over the course of the next four days, several milestones will need to be achieved to unlock the image of the driver. At each milestone — dynamically determined by the volume of tweets with the #LongestDriverinGolf hashtag — fans will be able to view a new section of the driver image.

Throughout the campaign, eight additional milestones will be reached along the way, each highlighting a certain aspect of the club’s technology, with clear explanation by Dr. Alan Hocknell, Callaway’s Head of Research and Development.

The campaign has already begun with posts on Callaway’s Facebook page and emails to the MyCallaway fan base, retailers and Media Partners.

Callaway PR & Events Manager for UK & Northern Europe, Elliott Platts said, “The Tweet to Unleash campaign is part of our new focused effort to connect more directly with golfers and Callaway fans. This innovative ‘social media reveal’ is a first in golf that breaks the tired template of more recent golf product introductions.”