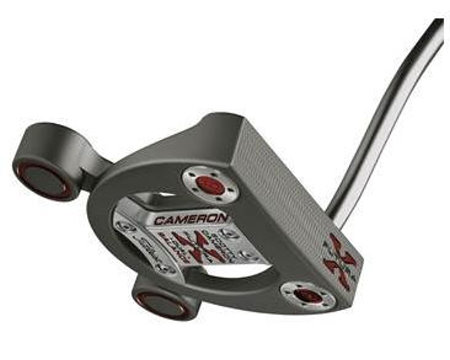 The new Scotty Cameron Futura X Dual Balance mallet, a product of comprehensive putting research and golfer testing, provides maximum stability through the stroke and at impact from a high MOI, counterbalanced design. The putter features advanced perimeter stability weighting in the head and a standard length of 38 inches with a large diameter 15-inch grip that reduces hand action for a smoother, more stable stroke.  A 50-gram counterweight in the butt of the putter shaft helps golfers make a proper stroke with the butt of the shaft pointed at the midsection.

“We’ve found, through our last 20 years of high speed video research with tour players, that the best putters in the world point the butt of their putter at their midsection throughout the putting stroke,” said Master Craftsman Scotty Cameron, whose putters have been the No. 1 choice of players on the PGA Tour since 1997 and counting. “From address, to the backstroke, at impact and through the forward stroke – the butt of the putter remains pointed to about the same 1- or 2-inch circle in their belly area. With Futura X Dual Balance, the goal was to slow down the butt end of the putter and keep it stable. If you have quick hands, drag the butt away, or you struggle to make a consistent stroke with a conventional putter, this is a great option.”

The standard length is three inches longer than a conventional 35” putter. The large diameter Cameron Flat Front Winn grip has a coloured section at the top that indicates the proper hand placement at around 34 to 35 inches, which keeps the 50-gram counterweight above the hands for maximum effect. The grip length also allows for multiple hand placements and the ability to grip up or down, depending on the player’s preference. “The higher we can get the butt weight, the more counterbalance effect there is,” Cameron said. “The additional three to four inches provides stability but keeps the putter unanchored.”

Precision milled from high-grade 6061 aluminium, the head utilises a heavy stainless centre section and stainless heel and toe to deliver a precise counterbalance with an extra 50 grams in the head and a 50-gram weight in the shaft. The overall head weight is 400 grams, 50 grams heavier than the standard Futura X.

“We developed numerous prototypes using various counterbalance weighting techniques and tested them with golfers at the Putter Studio and on the PGA Tour,” stated Cameron. “When we introduced dual balance technology, the player feedback was extraordinary. It’s very balanced, it’s very controlled. It slows everything down and promotes a more flowing, lethargic stroke without the putter feeling too heavy. Some players have said it feels like an SUV versus a sports car.”

The head also features advanced perimeter stability weighting with four stainless heel-toe weights, two 20-gram weights on the rear balance bar and two 10-gram sole weights in the front corners. The resulting deep CG plus the perimeter weighting under the face creates forgiveness and solid feel for a great roll. “That rear balance bar allows us to add considerable weight a fair distance away from the shaft axis, which is really what drives the high MOI,” continued Cameron. “Can you get it too far back weighted? Absolutely. We put the balance point so it sets well and maximises the MOI and the resistance to twist at impact on off centre hits.”

The original Futura X head design was the direct result of Cameron’s extensive work with Titleist Brand Ambassador Adam Scott, who used a prototype version of the putter in winning the 2013 Masters Tournament. Scott, who has been using Cameron putters for more than a decade, calls his Futura X “the most stable putter I have ever played.”

Futura X Dual Balance has a suggested retail price of £315 and is now available from Titleist stockists.