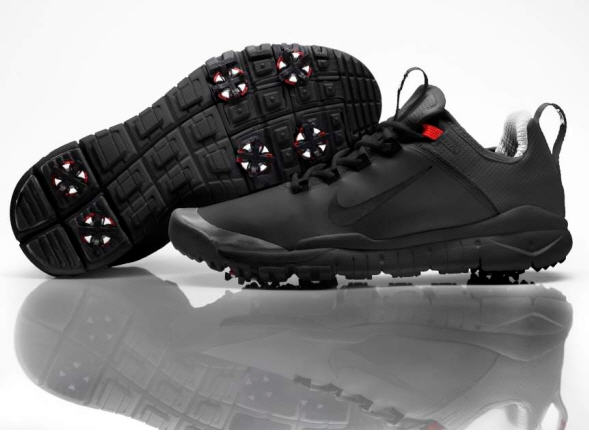 Ahead of his return to competitive action, Tiger Woods has been working with one of the directors within NIKE’s ‘Innovation Kitchen’, Tobie Hatfield, and NIKE Golf on a FREE-inspired prototype shoe that Tiger will wear during this week’s WGC-Bridgestone Invitational.

Originally developed in 2004 by a group led by Hatfield, NIKE FREE is a ‘natural motion’ technology that is designed to mimic and conform to the natural motion of the foot, coupled with the protection and traction of a lightweight performance shoe.

The FREE-inspired elements in this prototype model allow greater movement for the front of the foot, increasing stability with mobility. “This will help give Tiger greater stability as he addresses the ball. The freedom of movement that natural motion technology delivers will also allow more power to be released through the swing rather than through the body – which can happen when your feet are too static.” said Hatfield.

“I love the feel of NIKE FREE for training, so I asked Tobie if it was possible to bring that technology to the golf course. It’s exciting to see a conversation like that come to life and I look forward to wearing them this week,” added Tiger.

The majority of the upper consists of a polyurethane coated stretch fabric, also seen within the construction of NIKE Basketball’s Hyperfuse 2011. Part of the heel is created from recycled NIKE Air Max units melted into thread and then woven together to create a strong, breathable textile material. The FREE-inspired outsole is directly taken from NIKE Sportswear’s Special Field Boot designed for first-responders.

This model also has a half heel counter in both shoes to give more stability on the lateral side, particularly in follow through. The shoe also incorporates NIKE Flywire (first introduced in Beijing in 2008) attached to each lace loop, which when pulled tight envelope the foot for maximum comfort and stability.