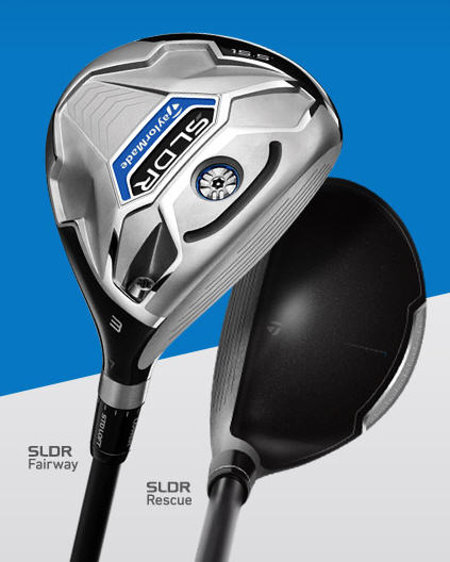 Similar to the SLDR driver, each club combines a low and forward centre of gravity (CG) placement, a recent TaylorMade engineering feat wherein weight is re-located to the front of the head to promote faster ball speed, a higher launch angle and a lower spin-rate. TaylorMade research indicates the SLDR fairway to be the longest adjustable fairway wood in company history.

“We have heard from all types of golfers ranging from weekend players to Tour pros that SLDR is the longest TaylorMade driver they have hit,” said Tom Olsavsky, TaylorMade’s Senior Director of Product Creation for Metalwoods. “This eye-opening distance gain is a result of the low and forward CG placement”.

The other performance attribute in the new SLDR fairway and Rescue clubs is an improved Speed Pocket. As seen in the RocketBallz metalwood and in the RocketBladez irons, the Speed Pocket increases face flexibility to promote faster ball speed. Unlike the previous RocketBallz metalwood line-up, which had an open slot on the bottom of the clubhead, the SLDR has a more efficient Speed Pocket design featuring a polymer fill to keep grass and debris out of the pocket.

SLDR fairways and Rescues incorporate the same rich, charcoal-gray crown and traditional shaping as the SLDR driver. The dark crown-colour contrasts agreeably with the silver-coloured clubface to make it easy to align the face accurately at address. They also have a shallow face that delivers a clean and confidence-inspiring look at address.

Available in both the SLDR fairways and Rescue clubs, TaylorMade’s Loft-Sleeve technology allows golfers to adjust the loft 1.5° up or down to dial in their optimal launch conditions. In the past, better players have been reluctant to play higher lofted metalwoods because of an increased spin rate. However, the new low-forward CG location dramatically reduces spin and results in greater distances with higher lofted clubs.

SLDR fairways will be available at retail from 21st November and the SLDR Rescue from 1st November 2013.