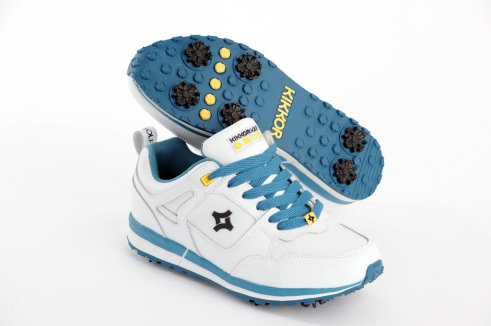 The European launch of Kikkor Golf Shoes brings a whole new concept of North American design, style and playability to our shores.

The shoes – the brainchild of Canadian golf professional James Lepp – offer unique styling, outstanding comfort and superior performance. They were launched in North Americain 2010 and have proved so popular that Golfweek magazine commented the company sold so many they “…can’t keep their shoes on the shelves”.

Kikkor is an alternative golf footwear brand targeting players who are ‘young at heart’. The shoes are built with comfort and style in mind first and foremost, without ignoring important technical attributes such as grip, stability, waterproofing and durability.

The range takes its influence from the classic North American athletic and skate shoes and the popular ‘sneaker’.

Dean Klatt, managing director of distributor Phoenix Brands, said: “The Kikkor range is set to have a massive impact on the golf consumer. While golf apparel has moved away from the staid image which was many people’s perception of the sport, until recently, shoes have remained largely the same design.

“James Lepp’s view was that there was no reason the fashionable street-shoe design could not be adapted for the golf-shoe market providing the necessary technical attributes were also incorporated.

“That has been achieved – and even, with the addition of the VEKTRboard™ sole’s claw-like traction, improved upon. The full range – which will be available here in 2012 – is extensive and varied, from a slip-on through to ankle boots. We firmly believe that the Kikkor brand will be turning a lot of heads on the fairways ofEuropein 2012.”

Retailing at under £100, not only are they the most fashionable shoe on the market, they’re also not going to break the bank. From the unique canvas deck-shoe-style Slyder through to the women’s Tour Sporte, the shoes are unmistakably trendy and desirable, as well as practical and effective.

Each of the 156 players at July’s US Junior Amateur Championship received a pair of the shoes courtesy of the brand’s founder who had previously played in the event, and Lepp commented: “I can’t remember what I received back in 2001, but I’m pretty sure it wasn’t a cool pair of golf shoes.”

He added: “It doesn’t matter what age you are – 10, 25 or 45 – nobody truly wants to wear the same stuff as their dad. The golf shoe industry consistently designs shoes that are targeted only for the older demographic, leaving younger players with very few options that match their personal style.”

Ireland-based Phoenix Brands was first established in Australia in 2000 and was responsible for marketing and distributing global brands such as Cleveland Golf, Never Compromise, Nickent Golf and Fidra clothing. It launched in Europe in 2009 and specialises in introducing innovative brands to European sports industries.