Has laser’s inherent weakness as regards line-of-sight finally been exposed by a new feature from golf GPS specialists SkyCaddie? 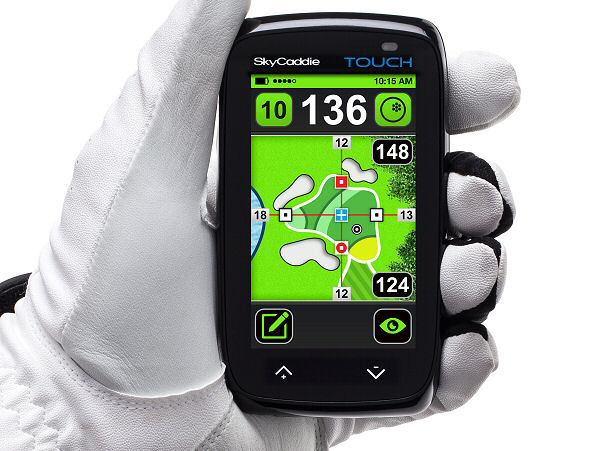 Evidence from a major recent PGA event suggests that it tips the scales in favour of GPS as regards use in elite competition – and the technology is set to be introduced into more PGA events in 2018.

When they were given a SkyCaddie Touch GPS with the new Pin Position feature activated, they quickly found that they were less reliant on their laser rangefinders – and in the winner’s case, that it relegated his laser to a mere backup device.

That’s the finding from November’s Grand Final of the SkyCaddie Pro-Captain Challenge 2017, when ten qualifying pairs gathered at the Mazagan Beach Resort in Morocco to compete for one of the PGA’s most prestigious trophies.

On each of the event’s three days all PGA professional competitors were given a Touch pre-loaded with each day’s pin positions, and were invited to use the Touch for their distance information.

The response from the pros was emphatic: adding the Pin Position function – with sub-yard accuracy – to SkyCaddie’s already-comprehensive distance information for each hole gave the fully-loaded GPS devices a huge advantage over laser.

With no ‘blind spots’ whatsoever – an issue with which laser users are very familiar – the Pin Position-enabled SkyCaddies gave competitors not only exact yardages to the day’s pins, but also to accurate lay-up points on each hole, distances to dozens of key target points per hole including carry distances for all hazards, and even yardages to the major contours on each green, however obscure to the naked eye – something which lasers cannot do.

Event winner Paul Bradshaw, Head Professional at Holme Hall GC in Scunthorpe, said: “Over three rounds the experience proved to me that when Pin Position is available for the SkyCaddie Touch, it makes my laser obsolete.

“The Morocco event was the first time I had used SkyCaddie Touch with Pin Position. I’ve been a laser user for 15 years, but in Pin Position-enabled events my laser will now be just a backup. The SkyCaddie was a Godsend for lay-up shots in particular, and it both improved and speeded up my game. With a laser you’re dead without line of sight, but Touch with Pin Position makes that problem disappear completely. It gave me Front, Back and Side distances to all parts of the golf course instantly, including the greens, and both my partner and I quickly came to trust the SkyCaddie yardages without hesitation.

“The biggest advantage was in knowing instantly where all the hazards were, on an unfamiliar golf course. Without doubt, having Pin Position enabled on the SkyCaddie Touch was a factor in our victory. We used it almost exclusively, and lasered only a few times to double-check a distance to the pin – and when we did, the SkyCaddie and the laser were never more than a yard apart.

“On golf courses where there are a lot of blind shots, laser is no good. On the 18th at Mazagan in November I was looking to close out the tournament.  I wanted to leave myself with a safe 120-yard layup to the pin. It was blind so my laser was useless. But a quick look at my SkyCaddie gave me a 168-yard shot and an exact layup spot – simple! Through the week, it was of far more benefit to me than a laser.

“From now on my laser is just a backup. I’m ordering a SkyCaddie Touch, and the Captain’s getting one too.”

Third-place finisher Andrew Baguley, the experienced Head Pro at Leigh GC in Cheshire, said: “My laser is fine as long as you can see the flag, but it often leaves me guessing at a yardage. In contrast I found SkyCaddie Touch with Pin Position to be great. I knew it was giving me an exact yardage to the flag, and it was dead simple to move the cursor to any other point on the hole.

“I quickly learnt to trust the SkyCaddie yardages, particularly from distance. For example, with the SkyCaddie it is simple to see the exact yardage to the corner of a dogleg hole – even if is hidden behind a bunker – or to plan your lay-up shots. From now on I will be using a combination of both SkyCaddie GPS and laser, which gives me the best of both worlds.”

Muswell Hill GC’s David Wilton, who finished fourth, said: “The simplicity and speed of the SkyCaddie GPS was beyond question, and I quickly learnt to trust the Pin Position feature. I used the SkyCaddie in all three rounds – it was excellent.”

And event runner-up Cameron Clark, from Moor Hall GC in Sutton Coldfield, said: “I am normally 100% laser but I also used the Touch a lot in Morocco, especially for lay-ups.”

SkyCaddie’s James Holmes said: “Whether you are competing at elite level or playing in your club’s monthly medal, SkyCaddie Touch with Pin Position activated is now demonstrably the most complete distance measuring device on the golf course.

“Only SkyCaddie can guarantee that its GPS maps are accurate for professional events, because only we constantly update our course maps on foot, by invitation, using professional surveying equipment.

“In Morocco it was fascinating to watch PGA pros who had previously been totally reliant on their laser devices come around to SkyCaddie GPS, once they used the Pin Position feature.

“With Pin Position your SkyCaddie GPS now shows the exact same distance to the pin as a laser – but it also gives you comprehensive extra distance information throughout the hole, at-a-glance, within seconds, without needing to laser anything. That speeds up play, makes it more enjoyable, and enables you to play better.

“We are looking forward to seeing what happens when the PGA uses Pin Position in more of its events in 2018.

See www.skycaddie.co.uk for all information