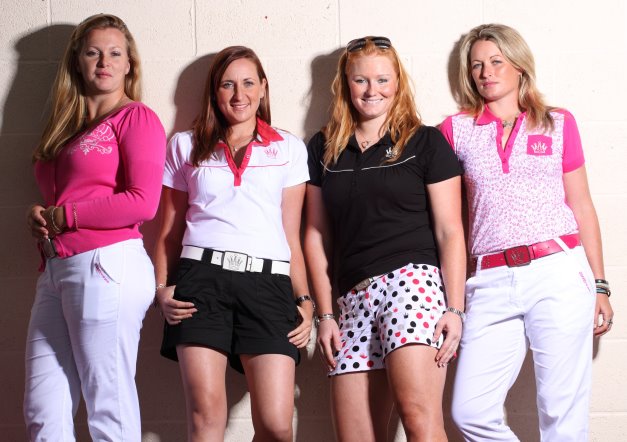 Bunker Mentality one of Europe’s most fashionable golf clothing brands launched its women’s line ‘Queen of the Green’ earlier this year which has proved so popular they immediately signed up four Ladies European Tour players.

The first to sign was Kylie Walker from Scotland, rapidly followed by Tara Dayer Smith, Holly Aitchison and Rebecca Hudson.

Brand Director Robert Hart said: “It’s been a fantastic 12 months for ‘Queen of the Green’ and the signing of the four girls has just brought even more momentum. Kylie and Holly both qualified for the Ladies British Open at Carnoustie which is also very exciting .”

Queen of the Green is dedicated and fully committed to women’s golf and will soon launch its own dedicated website. The site will feature all things ‘Queen of the Green’ but it will also boast a cool blog, style guide and of course will be fully integrated with the brands new media facebook and twitter sites.

The Brand’s Sales Director Carol Duncumb is very keen that a two-way dialogue is created between the customers and the brand.

“We have a terrific relationship with our Bunker customers and we will focus on doing the same with the women who come to our ‘Queen website,” she said. “We already have more than 400 fans on our Queen Facebook page and hope to increase this over the next year with the new website. Each of our LET players will have their own dedicated page on the site where they can write a regular blog, and post pictures about life as ‘girls on tour’ which we believe will help encourage others considering turning pro.”

The brand recently had all its LET players at the Nottinghamshire GC for a photo shoot which was a great day and everyone was very impressed.

LET pro Holly Aitchison said: “I’m really honoured to be part of ‘Queen of the Green’  team and part of the brand. It means a lot to come in  at the beginning as the brand is really taking off…” and Kylie Walker who was the brands first pro is just as keen: “I love the clothes as they make me feel very feminine and I enjoy wearing them.  We get a lot of other players commenting on the logo and people are getting to know the brand as we are all wearing it.”

The brand will be launching its all new Spring Summer 2012 Collection to coincide with the website launch.

Queen of the Green www.queenofthegreen.com