Qualibra now available in time to cope with summer stress 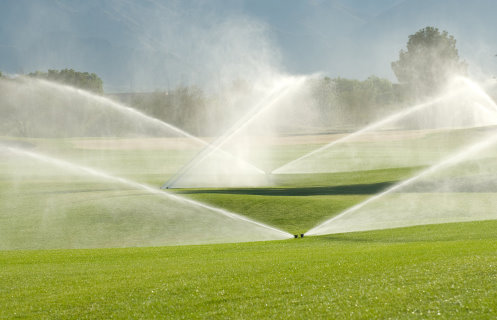 The exciting new Syngenta wetting and water conservation agent, Qualibra, is now available from turf product distributors across the UK and Ireland. The dual-action of combined penetrant and polymer will be especially important to cope with this season’s huge variability in weather conditions, from record rainfall and wet in Scotland, northern England and Ireland, to drought conditions in the south and east of England.

Syngenta Technical Manager, Dr Simon Watson, advises the combined approach is especially important to get the best results from both components. “The penetrant effectively spreads surface water and aides infiltration across the surface to optimise playing conditions. And it also helps move the polymer faction into the soil profile, where it can hold soil moisture deep and evenly,” he said.

Holding water more evenly and efficiently throughout the root zone of the soil profile, even in hydrophobic soils, will help to effectively prevent  Dry Patch. With greater soil water availability, plants will produce more roots, which in turn improves turf health, uptake of nutrients and ability to withstand summer stress, he added.

Water companies are reported to have already written to golf clubs in London and the south east to request voluntary measures to restrict irrigation and water use on courses this summer – such as suggestions to stop any irrigation on fairways, or reduce overall use by a set target. This will even cover courses with borehole extraction licenses and on-site reservoirs. Whilst any reductions are currently voluntary, the letters include a thinly veiled threat to invoke statutory powers to limit water use.

Dr Watson advocates the dual action of Qualibra can help greenkeepers make better use of irrigation scheduling and conservation of water resources. “It is recognised that the most efficient use of water is achieved from applying a higher volume of water less frequently, compared to the little and often approach.  Applying more water less frequently helps to rehydrate the soil more effectively to depth and significantly reduces the effect of evaporation from the soil surface in hot summer conditions,” he advised.

“However, some greenkeepers are reticent to adopt this approach for fear of creating soft putting surfaces after a heavy application, or where dry patch or hydrophobic soils lead to rapid loss of moisture through the soil profile.”

The use of a Qualibra can eliminate the risks by moving the water away from the surface quickly, to retain firm playing conditions, but then holding greater reserves deep and evenly in the root zone for more efficient utilisation. Quickly getting the turf surface dry also reduces humid conditions in the thatch layer that is more conducive to disease, and is a further reason to avoid irrigation every day, added Dr Watson.

Qualibra is distributed in the UKand Irelandby Everris and available from turf product retailers nationwide.