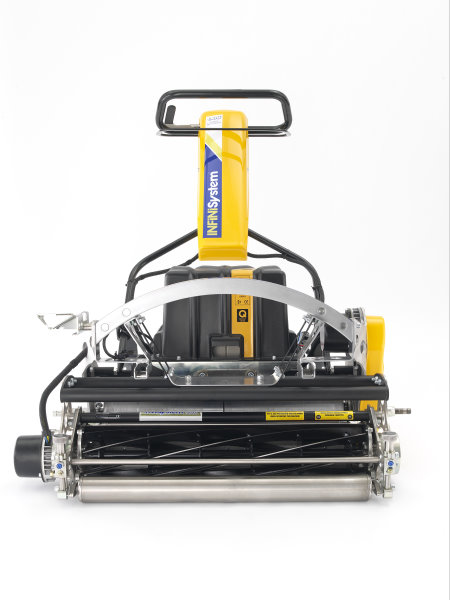 It may be thought that a mower is just a mower.  However, in today’s market products have to be more advanced in order to compete against the established brands.  To break into a monopoly a new product has to be special – and ATT did that with the TMSystem™ for triplexes.  They did it again when they evolved it into a pedestrian version, the 22” INFiNiSystem™ – and now the company has done it again with a new 26” model.

It was determined from the outset that the 22” INFiNiSystem™, configured purely as a mower, would need to cut as well as a conventional mower; track straight and follow undulations; be within a certain weight category; be quiet; have a swappable dual power source; be maintenance and environmentally friendly, and above all be within a certain price range offering value for money.  It also had to accept, and power, the full range of existing TMSystem™ Cassettes.  This “no compromise” attitude is at the core of the new 26” INFiNiSystem™.

The simplicity with which both the cassette carrier chassis and the SMARTCut cassette can be adjusted permits alteration of the behind Centre distance and the attitude angle of the bedknife  This has also helped enable higher heights of cut which will prove to be very popular with football grounds.  The eccentric on the bottom block which holds the bedknife allows a more aggressive or less aggressive position at point of cut.  A good example of this is when the grass is under a lot of stress. Moving the bedknife eccentric to allow the bedknife to come forward to a less aggressive position will help the grass through more stressful periods.

Each of the ATT SMART cassettes impart different requirements on the drive system, but do not compromise the usefulness of any of the other cassettes.  For example, the SMARTCut (cutting unit) cassette needs to operate at a greater height to cut grass than most of the other cassettes (verticutting, spiking, scarifying etc.)  If the same geometry was used to house all of the different cassettes then the relationship of the bedknife angle to the turf for the SMARTCut cassette would be wrong.  It would still cut, but there would necessarily be a compromise.  This is resolved by the chassis having a multi-position rear roller that brings the geometries of the unit into line with which ever process the machine is required to perform.  This Cutting Cassette offers unrivalled versatility and ease of maintenance with 7, 11 & 14 blade options available to give a cutting height range of 1.6mm to 25mm (0.06in to 1 in).

The unique floating head mechanism has a ‘dynamic return’ feature that is constantly trying to spread the weight of the machine evenly, even when on steep slopes. This feature enables the 26” INFiNiSystem™ to offer increased productivity because of the wide width, but with no compromise to finish due to surface scraping that some competitor machines would have.

Further multifunctionality comes in the ability to switch from hybrid power, generated by an engine, over to pure battery power – for which the low noise output under such power has seen the INFiNiSystem™ being awarded the Quiet Mark.