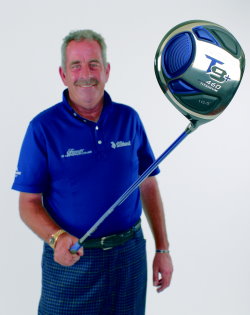 Hot on the heels of securing the services of Ryder Cup legend Sam Torrance, John Letters of Scotland are delighted to announce the launch of a new range of golf equipment at St Andrews during The Open Championship.

The re-launch of John Letters in Scotland will take place at the Fairmont Hotel, St Andrews. The exhibition/demo will be open from 9am – 6pm Monday July 12th to Saturday July 17th and from 9am until noon on Sunday July 18th, where members of trade and public will get the first opportunity to see the new T9+ and T8 ranges and also get to hit the products.

Speaking after re-signing with Letters, nearly 40 years after signing his first professional contract with John Letters of Scotland in 1971, Seniors Tour star Sam Torrance commented: “I return to the fold with Letters at a very exciting time with the launch of a new range of golf clubs at St Andrews during the Open Championship.”

Torrance added: “I personally want to see Letters back on the shelves of the best golf shops in Scotland in the next few years and sincerely hope my association will once again help drive consumer demand for this famous old name with its birthplace on the banks of the Clyde.”

Established in Scotland in 1918 and renowned globally for producing golf equipment of the highest quality, John Letters will be showcasing their latest range of performance products during one of the highlights of the golfing calendar and what better place to do it than St Andrews.

With an unrivalled heritage and history of craftsmanship within the game and with firm roots in Scotland, John Letters are looking to use the demo week to re-connect with the golf trade in Scotland after a five year absence.

With new investors into John Letters of Scotland Limited and a renewed enthusiasm to extend the brands appeal, UK Golf Distribution, a specialist golf distribution company, has been tasked with growing the brand globally, and in particular in Scotland, which until now had only be available through leading golf retailer Direct Golf UK.

Mike Smith, General Manager UK Golf Distribution, commented: “We look forward bringing one of Scotland’s fondest and most famous golf brands back home. With a new comprehensive product range for 2010 combining the very latest technologies with Letters’ fine craftsmanship tradition, we have no doubt the new range will help us re-engage with our many fans in Scotland.”

With all visitors welcome, without appointment, John Letters look forward to warmly welcoming the Scottish golfing public next week.

Preparations for the opening of the much-anticipated Dunas Course at Terras da Comporta next summer are moving into top gear with the new Portuguese golf destination investing €1.5m in the latest state-of-the-art greenkeeping equipment.