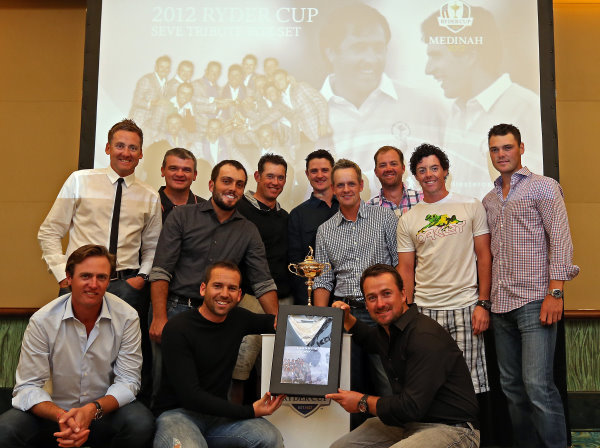 The spirit of Seve Ballesteros, so evident on the final day of the ‘Miracle at Medinah’, is once again unmistakably apparent during this week’s DP World Tour Championship in Dubai with all 12 Ryder Cup heroes reunited to help launch the limited edition 2012 Ryder Cup Seve Tribute Box Set.

Inspired by the homage paid to Seve by the entire European Team, the box sets comprises a shirt and sweater combination in Seve’s iconic blue and white Sunday colours. The garments feature not only the Official 2012 Ryder Cup Match Shield embroidered on the chest, but also the unique ‘Seve Tribute’ embroidery on the left arm that so inspired Europe to such great heights on the final Sunday in Medinah.

The unique and exclusively designed Seve Tribute embroidery incorporates the Spaniard’s trademark silhouette of his celebration at the 1984 Open Championship, his name, the years he lived and five stars signifying each of his Major Championship victories and is identical to the embroidery worn by the 12 players who produced the greatest European comeback in Ryder Cup history to win 14 ½ – 13 ½ in Chicago.

The 2012 sequentially numbered limited edition box sets – in recognition of the year of the match – have been supplied by Glenmuir, Preferred Clothing Supplier to The 2012 European Ryder Cup Team, and Kitbag, Official Retailer of European Ryder Cup Merchandise on a not for profit basis.

As well as allowing the team members to say a personal thank you to José María Olazábal for his inspirational captaincy in Medinah, the box sets also have the goal of raising significant funds for The Seve Ballesteros Foundation partnering Cancer Research UK, a partnership personally created by Seve to help fund their world class brain cancer research.

With the generous support of Ryder Cup fans this special project, driven by Ryder Cup Europe, is set to raise in excess of £120,000 to enable The Seve Ballesteros Foundation to continue its crucial work. The treasured box sets are available from the Official European Ryder Cup Online Store (click here to access the store) and have the backing of all of the European Team including Europe’s talisman at Medinah, Ian Poulter, his fellow Englishman Justin Rose and Seve Ballesteros’ fellow countryman Sergio Garcia.