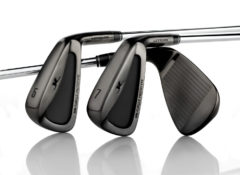 John Letters of Scotland, the equipment brand with 93 years of clubmaking history, unveiled its latest collection of the iconic Master Model products at the 140th Open Championship at Royal St George’s.

With a history that is synonymous with The Open, with former staff players Fred Daly, Gary Player and Lee Trevino all winning the Claret Jug using John Letters equipment, Scotland’s finest clubmaker since 1918 utilised golf’s most important major as a springboard to launch the new limited edition Master Model Tour Black irons and Tour Driver as well as re-launch one of the most celebrated brands in golf, the Golden Goose; creating a storm of interest.

The Master Model Black irons feature an 8620 mild carbon steel construction for a soft, yet solid, feel, but come with an anti-glare black PVD finish for a stunning look at address. The impressive Master Model Tour Black Driver is targeted towards the low handicap golfer and features a plasma welded hot Beta Titanium face, a classic pear shape at address with a one degree open face angle for the look better players prefer and a stunning black PVD finish. With its powerful flight and explosive feel, it’s the finest driver in brand has ever produced.

Meanwhile, the new Golden Goose Putter range, including ‘The Original’ Golden Goose with its double face design, are CNC milled from the finest 303 stainless steel and feature ‘Roll-It’ technology grooves on the face for a purer roll and a softer feel at impact.

The John Letters Master Model irons are one of the most iconic models in golf, with a history and heritage second to none. The Master Model irons were first made famous by John Letters staff player Fred Daly – winning the 1947 Open Championship at Royal Liverpool Golf Club. He followed this with the News of the World Matchplay Championship, the unofficial second British Major of the period.

Throughout the 50’s, 60’s and 70’s, the Master Models were seen as the absolute pinnacle of iron design and were used by a host of tour players to record a reported 13 Open Championship victories. To be offered a signature set of Master Model irons was seen as the ultimate accolade and as well as Daly, Dai Rees, Johnny Fallon, John Panton, Gary Player, Lee Trevino, Bernard Gallacher and Sam Torrance all had their own range of Master Model irons.

The most exclusive set of Master models however, were reserved for Ol’ Blue Eyes himself, the legendary Frank Sinatra who would only ever play John Letters and had his own exclusive set of signature Master Model irons.

For further details on all the latest hand-crafted John Letters equipment due to be launched over the coming weeks, please visit www.johnletters.com