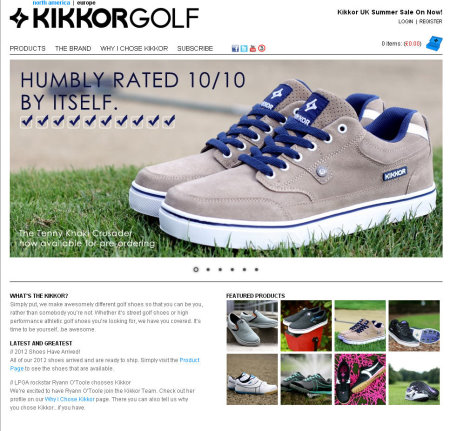 The founder of Kikkor Golf, James Lepp, just failed to win Big Break Greenbrier – the 18th series of the Golf Channel’s reality golf show – as his friend Mark Silvers earned a place in the 2013 Greenbrier Classic, on the PGA Tour.

Lepp, 28, from Abbotsford, British Columbia in Canada, fought his way through to the final pairing in the 11-week series, which was filmed during the summer of 2012, with the final programme broadcast Stateside on 18 December.

But although the two-time winner on the Canadian tour played well in the final, it was 25-year-old Silvers who fought back to win despite being three down with five to play.

Lepp turned pro in 2006 but gave up playing professionally in 2010 to concentrate on his burgeoning golf shoe business, Kikkor, which has taken both North America and Europe by storm.

And, despite failing to win the popular series, the firm fans’ favourite had no complaints. “We felt like we’d won already just by getting this far and doing it in a respectable manner. If I can compete under these circumstances and perform well I believe I can compete anywhere. I don’t feel I’ve got to rush back into golf right now. I’ve a lot going on in my life.”

And that, of course, includes his very successful business venture, Kikkor Golf, which has spearheaded the crossover-style golf shoe movement in North America since it was launched in 2010.

Kikkor takes its influence from the classic North American athletic and skate shoes and the popular ‘sneaker’. They are built with comfort and style in mind first and foremost, without ignoring important technical attributes such as grip, stability, waterproofing and durability.

Lepp’s desire was to produce golf shoes that combined unique styling, outstanding comfort and superior performance. Following the 2010 launch, they proved so popular that Golfweek magazine commented the company sold so many they “…can’t keep their shoes on the shelves”.

Kikkor’s European spring/summer 13 range, which launches at the end of January, includes several new product lines and the distribution has been taken on for 2013 by Surrey-based Barrelfield Golf Europe under the auspices of Ross Hastings, the man who first introduced Callaway and Galvin Green to the UK.

Retailing at under £100, not only are highly fashionable shoe, they’re also not going to break the bank. From the unique deck-shoe-style Slyder Premium through to the women’s Tour Estrella, the shoes are unmistakably trendy and desirable, as well as practical and effective.