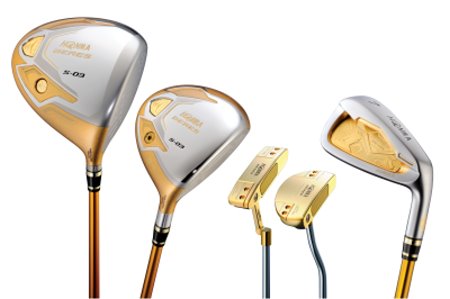 Golfers near London, Glasgow and Birmingham will have a rare chance to try some of the world’s most sought-after golf equipment in a series of spring 2014 demo days for Japanese club-maker Honma.

Three Honma stockists will be giving product and fitting demonstrations featuring the full 2014 range of Honma clubs at the demo, which will be supervised by specialist Honma custom-fitter Mathieu Humel.

Honma demo days in other parts of the country will be announced shortly.

Premium Golf, based at Worplesdon Golf Club, will be giving product and fitting demonstrations featuring the exquisite Japanese clubs on Saturday 12th April, and again on Saturday 12th July.

Film star Jack Nicholson, property mogul Donald Trump and a host of other celebrities have played the 55-year old Japanese brand’s golf equipment, which commands over £60,000 for a full set in its 5 Star specification, which features 24K gold, PT1000 Platinum and ultra-high-performance components.

“Honma makes clubs the old-fashioned way, by hand and with extreme attention to detail” said Honma’s UK spokesman Andy Hiseman. “It is the opposite of mass-production, so like a luxury car you pay a little more than the norm, to get something over and above what most people have experienced before. The demo day is the tried-and-tested way for golfers to get to know a range, and it is important that Honma has taken this step – far too many UK golfers have yet to experience the unique feel of a Honma golf club.”

Honma in the UK www.honma.co.uk