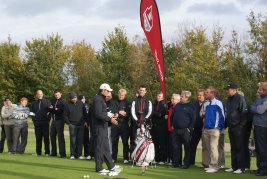 Three-time Major champion Padraig Harrington was on hand to launch the new Di11 irons from Wilson Staff at the London Club, Kent.

The Irishman figure-headed the launch only 24 hours after winning the Johor Open in Malaysia, promoting Wilson’s longest ever iron that he used during this summer on blustery links courses to gain distance and accuracy off the tee.

The Di11 incorporates the largest sweet spot of any Wilson iron – 36% larger than other game improvement clubs in the same category – and is the result of weight being removed from the perimeter of the face and inside of the cavity leaving a large, unsupported face.

“Wilson Staff has a very strong following of players who look to hit the ball further and Padraig’s backing of the Di11 further highlights the logic behind this heritage,” said Doug Wright, Business Development Manager of Wilson Golf.

“Intensive testing shows that the irons go further than any iron we have produced and the ‘visual cue’ at address has proven to appeal to a wide range of golfers thanks to its ability to enhance shot-making confidence,” he added.

As well launching the Di11 irons, Harrington also competed in a six-hole skins match against three other Wilson customers. The six-time Ryder Cup player tested out the new Wilson Staff Vizor putter, which is designed to provide complete alignment when standing over the ball.

Wilson is so convinced of the exceptional performance of Di11, that its current marketing campaign is based on the theme: ‘In a world of 1 to 10, this goes to 11…Once you hit it. You get it.’

The Wilson Staff Di11 irons (4-SW) are available in three different shaft options – steel (SL95 Wide Tip, 95g), graphite (UST AXIVCORE, 65g) and the exclusive co-cured ‘Half-and-Half’ shaft design that fuses the responsiveness of steel with the lightweight vibration-dampening properties of graphite. The RRP of the True Temper SL95 set is £349, the UST AXIVCORE £449 and the ‘Half-and-Half’ £449.