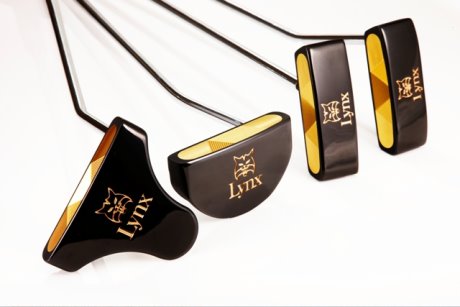 Harold Swash, one of the world’s foremost putting coaches, has joined forces with UK-owned Lynx Golf to launch an exciting new range of putters.

‘Swash By Lynx’ comprises a collection of four exceptional models, all featuring brand new alignment designs and ball roll technology developed by the short-game guru, known affectionately around the world as ‘The Putting Doctor’.

All the putters feature the new Pyramid Groove Design™ (PGD) – a unique trapezoid shape milled into the gold coloured aluminium face insert where a central section of horizontal grooves is met by two sets of side grooves running at 60 degree angles.

Said Harold: “Off-centre strikes produce side-spin and shot curvature as the putter rotates slightly at impact. Our new groove design is corrective and counters those damaging effects, bringing the ball back online and generating consistency and better grouping.”

‘Swash By Lynx’ also introduces two new alignment aid technologies: one to help the golfer keep the putter head square at address and impact; the other to ensure the golfer’s eyes stay directly over the ball – one of Harold’s key coaching principles for over 40 years.

This highly visible design illustrates instantly if the head is not square to the target line of putt.

Each model also introduces the Pyramid Alignment System™ (PAS) – tetrahedron-shaped alignment aids on the rear helping the golfer to stand with their eyes directly over the ball.

Visually, the golfer should line up their ball with the clean, straight edge running back from the top corner of the pyramid to its rear corner.

Said Lynx Golf CEO, Steve Elford: “Harold has more than 50 years’ experience in the golf industry as a coach and golf club designer and he has worked with some of the biggest names in the history of the sport – from multiple major winners to Ryder Cup legends.

“His expertise in the field of putter design and development is second-to-none and we are delighted to be working with him.”

Harold Swash’s original trade was that of a production engineer and ball-playing sportsman.  This knowledge and expertise, coupled with his passion for golf,  inspired him to design his first putter back in the 1960s.

He has coached many of the world’s top professional and amateur golfers with his innovative putting training techniques, including Padraig Harrington, David Howell, Henrik Stenson, Darren Clarke, Ian Woosnam and Nick Faldo.

All ‘Swash By Lynx’ putters have an RRP of £99 and come supplied with 1¼ inch wide midsize PU Lynx grips.