Golfers to share in Pinpoint revolution at driving ranges worldwide 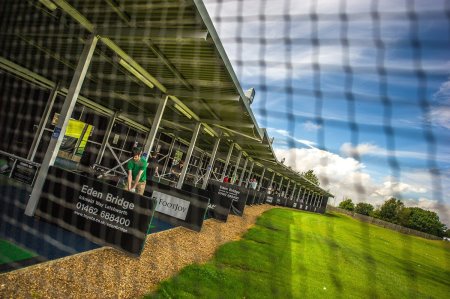 One of modern sport’s most talked-about technologies is coming soon to golf, with golfers at driving ranges across the world set to have their practice sessions revolutionised.

And with the DRS system a talking point in this summer’s Ashes cricket, the goal line system set to be introduced to the Barclays Premier League, and Wimbledon fresh in sports fans’ memories, August 2013 is an appropriate month for another major world sport – golf – to introduce ball tracking.

Pinpointgolf, a business which is based upon the technology behind the Hawk-Eye ball-tracking used in cricket, tennis and football, is setting its sights on the world’s golf driving ranges – and it is inviting everyone with an interest in sport to become involved in the company via the modern phenomenon of ‘crowdfunding’.

In a world-first, the company is creating a multi-tracking vision and radar system to simultaneously record dozens of balls struck simultaneously at a golf driving range.

The Pinpointgolf team, which includes some of the lead scientists who delivered the original core Hawk-Eye technology, says that each ball’s flight will be tracked by Pinpointgolf vision and radar technology, with data delivered instantaneously on screens in every driving range bay.

Balls struck by up to 300 golfers can be tracked at the same time, and unlike current launch monitors golfers will not need to pre-book their Pinpointgolf session with the range – as the technology will be available in every bay. With no more than 12-15 golf balls ever in the air simultaneously at even the world’s largest driving ranges, Pinpointgolf effectively has unlimited capacity to track every shot during a day’s golf at every driving range.

Pinpointgolf is not a simulator – it is the real thing. As Pinpointgolf shows the actual path of the ball, including how it is affected by wind and other weather conditions, rather than extrapolating data from monitoring the ball’s initial launch, it is also expected to be part of a new hyper-accurate golf coaching revolution at ranges worldwide.

On their screens, golfers will be able to see their actual ball trajectory, ball speed, ball height, carry and overall distance, and will also be able to track exactly where their ball finished with pinpoint accuracy. Pinpoint golf promises to give precise readings within 50cm, although this may be improved over time.

Knowing exactly what happened to their ball after they hit it means that golfers will reap more rewards from their practice session, whether they practice with or without a PGA professional to guide them as they improve.

It can often be hard to track a ball’s flight by eye, at a driving range, owing to the light or weather conditions. Pinpointgolf puts an end to this, and ensures that every golfer at a driving range knows exactly where every shot went. This is especially useful when hitting into blinding sunlight or bright skies. Pinpointgolf enables golfers to practice effectively and improve their golf in all daylight conditions, even when they can’t see where their ball has gone.

As well as basic shot information, the Pinpointgolf screen will also enable golfers to use their shot data in a variety of real-time coaching drills and games.

This is particularly relevant to young would-be golfers and beginners, as they will be able to engage in a golf game the very first time they pick up a club. For example, with Pinpointgolf’s distance-tracking technology, a five year old will be able to see the cumulative distance achieved by every shot they take, with an on-screen game urging them to hit the ball a little further on the next shot, to achieve the ultimate goal.

Pinpointgolf’s founders predict that this will attract a new generation to golf on a global scale.

“Participation levels in golf’s mature markets worldwide are flat” says Pinpointgolf’s Jonathan Attwood. “And yet golf was the world’s second most-sponsored sport in 2012. Why is all of this commercial interest not being turned into more golfers?

“We believe that it is because golf has long been perceived as being too expensive, too difficult and too time-consuming. Pinpointgolf is set to change that, by making the game instantly attractive to someone who is hitting a golf ball for the very first time in their life.”

Most bays at driving ranges are vacant for the majority of the day, and there is enormous capacity in the sport worldwide to cater for an influx of new customers.

“Not only will Pinpointgolf make every visit to a golf driving range more fun and rewarding,” says Attwood, “but it will provide the shot in the arm which golf needs, to compete with other global sports which have reinvented themselves for the digital age. We will also improve revenues for driving range operators, which in turn should help to secure the sport’s supply side for the future.”

The opportunities for social networking by sharing data from a Pinpointgolf practice session are not lost on the company’s founders, who believe that alongside building a huge audience of golfers worldwide, the business also represents another opportunity for everyone who is interested – namely, investment.

“Our crowdfunding page on www.CrowdCube.com – just search for ‘Golf’ – enables every golfer in the world to invest in this new business, with no lower limit set for the investment,” says Attwood. “Crowdfunding is the new way for people to get a stake in a business which they think is set to succeed, by helping it raise the initial funding it needs to launch the first part of its plans.

“We urge anyone with an interest in golf, or sport, to examine our pitch on CrowdCube – there is a video there explaining what we are setting out to do, as well as a detailed explanation of how the business will work. If you like what you see, then get involved!”

Following funding, members of the public will be invited to take part in Pinpointgolf’s initial tests, which will take place in the south of England. Investors will be encouraged to be the system’s first testers, adding an exciting angle to the crowdfunding process.