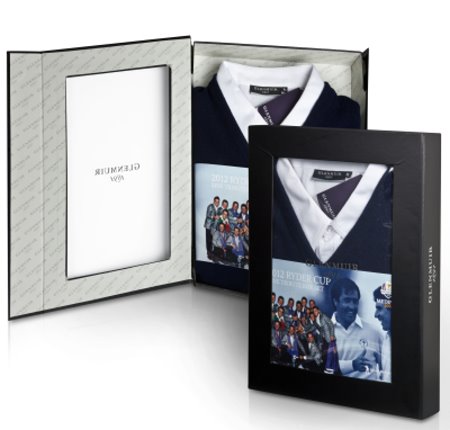 Golfers are being given an incredible opportunity to own a slice of golfing history with the launch of a limited edition 2012 Ryder Cup Seve Tribute Box Set – containing exclusively embroidered Glenmuir clothing.

Priced at £150, the sequentially numbered box sets each contain a high quality Glenmuir navy lambswool jumper and white cotton polo shirt with the Official 2012 Ryder Cup Match Shield embroidered on the chest and the unique ‘Seve Tribute’ embroidery on the left arm.

The embroidery, carried out at Glenmuir’s headquarters in Lanark, Scotland,  incorporates the Spaniard’s trademark victory silhouette, his name, the years he lived and five stars signifying each of his Major Championship victories.

It is identical to the embroidery worn by the 12 players who produced the greatest European comeback in Ryder Cup history to win 14 ½ – 13 ½ during the ‘Miracle at Medinah’ in Chicago.

With £60 from every sale going to the Seve Ballesteros Foundation for Cancer Research UK, golfers can not only own the special clothing that achieved worldwide attention but they are also supporting a tremendous charity initiative.

Said Brian Mair, Glenmuir marketing director: “We are delighted to be involved in this very special project which is set to raise over £120,000 for vital cancer research in Seve’s name.

“During the Ryder Cup we received thousands of enquiries from golfers trying to buy Seve’s Sunday colours, navy sweaters and white shirts, with the iconic embroidery worn by the European Team – and now they can.”

The treasured box sets are available from the Official European Ryder Cup Online Store and have the backing of all of the European Team including Europe’s talisman at Medinah, Ian Poulter, his fellow Englishman Justin Rose and Seve Ballesteros’ fellow countryman Sergio Garcia.

Launching the box set in Dubai, Rose said: “When I came off the green that famous Sunday, my first thought was Seve. I glanced down at my left sleeve and thought, ‘That’s the kind of stuff he would have done today.’ Therefore I’m absolutely delighted that we are honouring him and helping his Foundation in this way.”

Glenmuir has been the preferred supplier of shirts and knitwear to The European Ryder Cup Team since 1987, in one of the longest-running partnerships in professional sport.