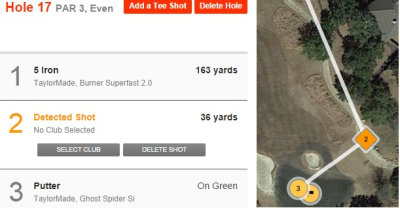 GAME GOLF, the first wearable device that automatically tracks and graphically displays a golfer’s round and statistics, has announced a series of revolutionary features.

The new GAME GOLF platform features, complementing the recently released Shot Dispersion Analysis and Challenge features, will create an all-new user experience on its web platform and through the GAME GOLF mobile apps on iOS and Android. The new features will be released in two stages over the next 14 days and include:

Smart Shot Detection: A new built-in algorithm automatically detects all shots from tee to green, so even if the player forgets to tag a shot, GAME GOLF captures the location of the shot and notifies the user during game review.

Round Privacy: With the new Round Privacy feature, a player can hide as many rounds as they like. All rounds signed as private can still be included in that user’s overall performance.

GAME Benchmarks: The new GAME Benchmarks allows GAME GOLF users to compare their statistics with other GAME GOLF users with similar score averages. This enables the player to see where their game may have room for improvement, make focused adjustments, and help shave shots off their rounds.

Mobile Challenges: GAME GOLF Challenges allow users to join or create community or private challenges in longest drive, GIR, putts and other statistics with friends and family members on the platform. Now golfers can create and join challenges on the go through their iOS and Android mobile apps, allowing for more social banter and competition on the GAME Platform.

GAME GOLF, available for both Android and iOS mobile devices, is dedicated to bringing innovative ways that connect golfers to their game, PGA Professionals and their friends through wearable technology. The updates were implemented based on feedback by GAME GOLF users who have logged more than 126,000 rounds on the platform in 79 countries worldwide since the product became available just eight months ago.

“We are dedicated to improving the GAME GOLF platform through user feedback and offering a state-of-the-art wearable technology at an attractive price point that fits every golfer’s budget,” said James Wang, GAME GOLF Vice President of Product. “We are inspiring golfers to play more golf and to use personal performance data for game improvement and deeper enjoyment of the game of golf.”

GAME GOLF consists of a small, lightweight device worn on the player’s waist and individual feather-light sensor tags that attach to the top of the grip on each club. Weatherproof and temper-proof, the durable club sensors pair easily with the waist-worn device with a simple tap. GAME GOLF automatically records the course, location on the hole, club used, club distance, and accuracy without interrupting the flow of the game, carrying smartphones in your pockets, or draining batteries mid-course.

Amazon.com, Apple.com and other online golf sites. GAME GOLF is also available at Apple retail and online stores in Canada, Europe, and the Middle-East, and specialty retailers throughout Europe.

GAME GOLF has strategic partnerships with Golf Channel, The PGA of America and PGA of GB & Ireland and is the only technology product ruled as “Permitted under The Rules of Golf” by the USGA and the R&A and is allowed for competition. PGA Tour professionals working with GAME GOLF to develop the product are 2010 U.S. Open champion Graeme McDowell, 2003 U.S. Open champion Jim Furyk, and 9-time Ryder Cup team selection, Lee Westwood.