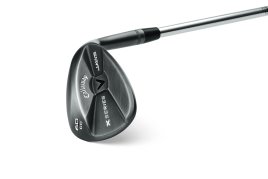 Callaway Golf Company today announced the January 14th retail availability of its new X Series JAWS™ CC wedges. Created by Callaway’s Chief of Golf Club Design, Roger Cleveland, the wedges debut Callaway Golf’s Tour CC grooves. This groove can only be found in Callaway’s forged wedges and irons and is crafted through a proprietary process. The groove also conforms to the Condition of Competition guidelines.

The result of more than four years of research, Callaway’s new Tour CC grooves are widely considered the highest spinning CC grooves available. The new wedges feature up to 21 tightly spaced grooves that provide the maximum cross-sectional area to ensure that moisture and debris are swept away on shots hit from varying course conditions.

The grooves can only be produced on a forged wedge, which enhances feel on shots hit around the green. The JAWS CC wedges are forged of 1020 carbon steel for a soft feel and feedback at impact on approach shots.

“Callaway wedges were in the hands of a number of PGA TOUR winners in 2010, including two major champions and the year-ending Tour Championship winner,” said Roger Cleveland, Chief of Golf Club Design, Callaway Golf. “They choose to play Callaway wedges because of the performance provided by the sole geometry, a softer feel because the wedges are forged, and groove technology that produces increased spin. We call it the ‘JAWS Groove.’”

New bounce options have been added for 2011, featuring soles that have been individually designed for maximum versatility, especially in firm and tight playing conditions. A zero bounce option is now offered in the 58- and 60-degree wedges. An eight-degree bounce is offered in 58- and 60-degree wedges as well. In addition to low bounce options in the aforementioned higher lofts, the JAWS CC wedges will now be available with reduced bounce offerings at 52, 54 and 56 degrees.

“These wedges can only be produced with a forging process, which provides a softer feel around the greens,” Cleveland added. “With up to 21 grooves – versus 15 on a standard wedge — you get more traction on the ball, which means more spin and more control. We have now added two new low bounce options in the JAWS Slate Series and the zero bounce wedge recorded its first win recently when Ernie Els won the South African Open.”

The X Series JAWS CC wedges are also offered with a C-Grindâ sole, which enhances versatility and delivers precision shot-making by improving turf interaction. This “C” Grind relieves the heel and toe bounce and reduces the sole width, enabling golfers to lay the face open while keeping the leading edge down.