With 6 million regular listeners a prime time slot on Five Live is one of the most coveted publicity goals in sport. The interview was arranged by Prazza’s agency Hiseman Limited, which will be handling the launch of the new brand around the world in 2011.

All this came just days after the unveiling of the Prazza®, which is set to rid the sport of one of its most annoying problems: the lost golf ball.

With an average of thirty minutes wasted looking for lost balls during each round of golf, and an estimated 500 million golf balls lost around the world each year, the Prazza has the potential to revolutionise the sport – which is often criticised for taking too long to play. 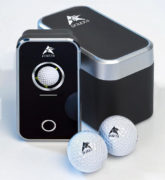 And with the makers’ claim that it is the world’s first practical golf ball finder. The Prazza is set to spearhead a new golf retail product category – findable golf balls.

Dutch firm Prazza Group (www.prazza.com) has revealed initial plans to retail the Prazza Golf Ball Finder system in the UK from November 2010, with a global roll-out in 2011.

The first items to go on sale are the £329 Prazza Golf Ball Finder set, which features a Prazza Tracker handset and two Prazza Golf Balls; and a sleeve of three Prazza® Golf Balls, available separately for £39.95.

The balls contain a micro-chip which uses active RFID technology to enable the Prazza Tracker handset to locate the ball from up to 100 metres, even in the thickest rough.

“Who hasn’t been frustrated by golf balls which seemingly vanish into thin air?” said John van Driel, CEO of Prazza Group. “With Prazza, the golfer avoids the embarrassment which – up until now – we all experience several times per round. Plus it’s expensive to always be losing golf balls – industry research has shown that the average golfer loses between four and five balls each time they play 18 holes.

“With Prazza, golfers will play faster and they will score better. We believe they will also enjoy golf more, and beginners will learn the game more quickly – and with less fear.”

The hand-held Prazza Tracker handset, which is roughly the same size as a smart phone, uses Active Radio-Frequency Identification (RFID) to track the Prazza ball. The handset bleeps (or vibrates in Mute mode) with increasing frequency as the golfer nears the ball, with a visual display to guide the golfer in the right direction.

The micro-chip in the Prazza Golf Ball is activated when the golfer hits a shot. As the signal remains active for 30 minutes after each impact, the Prazza ball and handset are in continuous contact with each other throughout a round of golf.

With a Prazza, golfers can walk straight to their ball after every shot.

Visitors to the company’s website can see a “real time” demonstration of Prazza in action, showing a golfer hitting his ball into thick woods, and retrieving it using the handset in an un-cut video clip. The video is also on YouTube.

“Being able to say that lost golf balls are now a thing of the past will have a huge effect on the amount of people who want to play the game,” said company President Jan de Waard. “We believe that our new Prazza ball-finding technology will significantly increase the number of golfers around the world.

“Why? Because golf can be a very embarrassing sport for a beginner. Looking for your ball on most holes takes a long time, and holds other golfers up. Plus it is expensive to tee up with a brand new ball, only to see it disappear forever into the long grass or trees! With Prazza®, any golfer, of any standard, will play faster, and with more enjoyment.”

Golf retailers should email support@prazza.com to enquire about selling Prazza.