A Visit to The PGA Show Requires Foresight 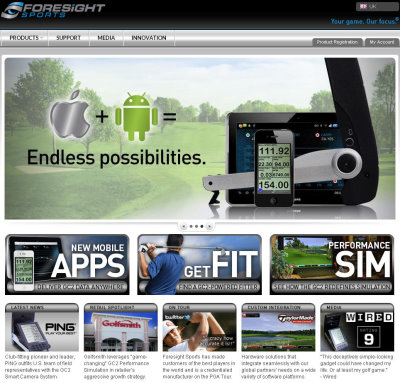 If you’re heading to the 2013 PGA Merchandise Show in Orlando (23-26 January) looking for the ultimate teaching and fitting technology – or even to purchase the ultimate golf simulator – be sure to make an appointment to meet with Foresight Sports, manufacturer of the market-leading GC2 launch monitor.

The 60th anniversary of the world’s largest golf trade show promises to be as busy as ever with 1,000-plus exhibitors covering nearly 10 miles of show aisles, one million square feet of interactive exhibit, demo and presentation space, around 1,400 members of the media and more than 40,000 influential PGA professionals and other visitors – and Foresight Sports’ GC2 and HMT (Head Measurement Technology) will be two of the most talked-about products on show.

The astonishing GC2 is now approved and recommended by most of the world’s leading club manufacturers including Titleist, Cleveland/Srixon, Cobra/Puma, PING and TaylorMade. It’s also used by dozens of the world’s top professional golfers

And now, the addition of Foresight Sports’ revolutionary HMT, after two years in development and exhaustive testing with major club manufacturers, means all teaching professionals and club-fitters can gain access to critical club-head data, including dynamic loft and lie, as well as ball-impact location – all to unprecedented levels of accuracy.

Previous techniques for calculating this information were crude at best and often proved inaccurate, but HMT offers sub-millimetre accuracy on critical data.

Edward Doling, sales director for Foresight Sports Europe, explained: “The GC2 directly measures and reads everything to do with the golf ball at launch using ultra-high-speed, dual-camera technology. In principle, the HMT does the same thing, only with the golf club.

“HMT represents a quantum leap in terms of technology available to the golf industry. By being positioned ahead and to the side of the ball, and looking back at the clubface, HMT is the only technology at this price-point that directly measures club-head data into the ball and through impact.

Such technology would previously have been developed only for use in R&D departments of the major manufacturers, but HMT is now readily available and affordable, directly measuring key club-head data with incredible accuracy, essential to any pro or club fitter.

Foresight Sports will be demonstrating GC2, HMT and full simulation at booth 1543 / ETC 32. To book an appointment with Foresight Sports Europe – official distributor for UK, Europe, Africa and the Middle East – call +44 (0) 845 644 3870 or email info@foresightsports.co.uk