Cobra Golf’s new range of King F9 Speedback drivers, fairway woods, hybrids and irons – which go on sale at the end of January – promise to be the fastest, longest and most forgiving family of clubs in the company’s history.

In tests, the F9 driver was found to be 17% more aerodynamically efficient than the F7 driver that Cobra launched two years ago. To create this more aerodynamic head shape, Cobra engineers raised the perimeter of the clubhead and rounded the leading edges to reduce drag and improve stability. The use of a CNC precision milled face, which is thinner and more flexible than a traditional hand-polished face, has increased ball speeds by up to 1.5mph, leading to increased distance.

The drag reduction design begins to take effect on swing speeds in excess of 85mph, and from there has significantly more impact the faster the golfer swings. 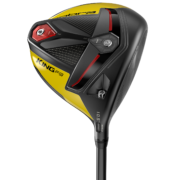 Tom Olsavsky, Vice President of R&D at Cobra Golf, said: ““We spent a lot of energy in terms of innovation to get to our initial concept of making a driver that was both aerodynamic and offered a low centre of gravity. We knew we were trying to get to a space that hadn’t been done before, but the goal was never to focus on one or the other, because we had to have both. We believe we’ve found the ultimate formula for speed, as true aerodynamic innovation and low centre of gravity has never been combined this successfully.”

To fine tune ball flight the F9 driver features interchangeable 14g and 2g sole weights, as well as an adjustable hosel. Additional 6g, 10g and 18g weights are available for custom orders to produce an even wider range of launch conditions. The heavy weight in the back location produces higher flight, while the heavy weight in the forward position reduces spin. 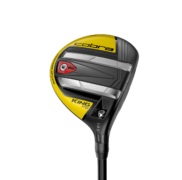 The King F9 Speedback fairway woods (£219) feature CNC-milled faces for the first time in a Cobra fairway, as well as Baffler rails, which become progressively taller as the loft increases. Golfers can choose from the standard model, which has a fixed 15g tungsten weight in the back, or the smaller Tour version, which has a 12g weight at the front for a more penetrating flight. They are offered in 13°-24° lofts (adjustable), with Helium 60 or Fujikura Atmos Blue 7 shafts. The Tour fairway comes with a Project X Hzrdus Smoke 7 shaft.

The King F9 Speedback hybrid (£179) boasts a stainless steel face insert and 15g tungsten weighting in the rear of the sole. It has been made a little larger than previous iterations to increase forgiveness and has a straighter leading edge for easier alignment, as well as progressive Baffler rails to improve turf interaction from different lies. It is offered in 19°, 21° and 24° lofts with a Fujikura Atmos 70 shaft. 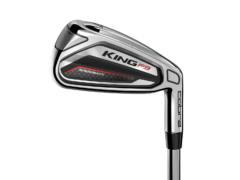 The King F9 Speedback Irons (£749/£649, gr/st) are billed as Cobra’s most forgiving to date, thanks to added weight placed low and back using a belt of steel that wraps around the back of the iron. The Speedback shaping has allowed more mass to be added low and wide on the heel and toe compared to a traditional iron. When combined with up to 33g of tungsten in the 4-7 irons, the MOI has increased by up to 10 per cent in the long irons, creating more stability for improvements in ball speed, distance, forgiveness, and accuracy. A seven-piece iron set (5-GW) is offered with irons KBS Tour 90 steel shafts.